0 or 6,500? – How Many People are Eligible to Be Pardoned under President Biden’s Cannabis Clemency Pardons?


Since Oklahoma’s medical marijuana law was passed three years ago, the state has become one of the most welcoming environments for marijuana entrepreneurs. Compared to Oregon, Colorado, and Washington, the state now has more retail cannabis stores. It already has more than 9,000 licensed cannabis farms, surpassing California in October despite having a population of only one-tenth that of California.

The growth is even astounding, given that marijuana used for recreational purposes is illegal in the state. However, Oklahoma has by far the most medical cards of any form, with about 10% of its almost four million population possessing one because of relatively lenient eligibility requirements.

Weed entrepreneurs have rushed into Oklahoma from all over the country due to its low entry barriers and a hands-off policy from state officials. It costs only $2,500 to start, compared to $100,000 and above in Arkansas. And Oklahoma, a state known for its tough stance on crime, has no limit on the number of cannabis farms, dispensaries, or even the quantity each farm can grow.

Due to this unchecked growth, this new breed of growers is competing against established ranchers and farmers. Recently, organizations representing farmers, ranchers, sheriffs, and crop dusters banded together to demand a ban on issuing new permits. They listed several causes: rising land prices, illegal farming, and pressure on rural water and electrical supply. New indoor farms in some areas consume hundreds of thousands of gallons of water daily.

However, Adria Berry, the head of the Oklahoma Medical Marijuana Authority, which regulated the market and reported over $138 million in income from retail, local, and state taxes on the sale of cannabis this year through November, said a ban is not expected.

Despite being an early critic of medical marijuana, Ms Berry claims that the sector is here to stay and that the state’s marijuana statute effectively restrains her agency from reducing the number of new licenses it issues. That translates to a continuous rise in the number of marijuana businesses in Oklahoma.

When he learned early this year that marijuana was being grown in Oklahoma, Mr Pederson, an immigrant from Seattle who had served in the Army, was seeking a new job. Despite being new to the business, he relocated to Keota to manage the modest, five-person farm that he said was supplying state dispensaries.

Growth Of Cannabis Industry In Oklahoma

The evidence of the rapid growth is apparent. Nowadays, municipalities have far more dispensaries than grocery stores. And there are now more cannabis businesses than cotton and wheat farms. A state that continues to be among the poorest in the nation has seen thousands of employment created by industry. Additionally, proponents of the sector claim that recent sentencing reforms and the less harsh response to marijuana and other drug possession have reduced the burden on the state’s prison system.

The chief data officer at Cannabiz Media, Ed Keating, analyzed the start-up capital in Oklahoma and Connecticut, a state with a comparable populations. Cannabiz Media tracks changes in the cannabis sector. Cultivation licenses often cost around $50 million, while purchasing a dispensary can cost over $10 million.

According to Mr Keating, giant multistate marijuana corporations have mainly opted to avoid Oklahoma’s boom and invest in states with more expensive and constrained market access. According to him, These mom-and-pop dispensaries offer services like the neighbourhood booze store or car wash.

However, detractors contend that Oklahoma farmers produce considerably more marijuana than can be legally sold in the state and are instead supplying the nation’s black markets, unlike local enterprises where most buyers are locals.

Growers can manufacture cannabis for as little as $100 per pound and sell it for between $3,500 and $4,000 per pound in California or New York because of lower labour, land, and license costs, according to the Oklahoma Bureau of Narcotics’s spokesperson Mark Woodward.

Solution To Such Violations

As a result of these infractions, the police have conducted several raids this year, closing roughly 80 farms since April in an attempt to reduce Oklahoma’s output of marijuana for the underground market. As part of an operation that had relocated from Colorado to Oklahoma, officials in Haskell County, a remote area in the state, in June confiscated 10,000 cannabis plants, 100 pounds of refined cannabis, a plethora of guns, and large sums of cash.

There is growing support for a more severe crackdown. Republican Senator James Inhofe asked the federal government for $4 million this year to directly support the Oklahoma Bureau of Narcotics to fight illegal farms. Additionally, a state legislature-introduced law would permit local governments in counties and cities to set their licensing caps.

Lawmakers have recently authorized a full-time enforcement team, and the state drugs agency has employed nearly 20 agents. The Oklahoma Medical Marijuana Authority can hire more than 70 new workers for compliance and enforcement-related positions.

A plunge in cannabis price

Growers have complained that the ever-increasing supply has caused cannabis prices to fall by almost half in the previous six months, to as low as $800 per pound for some cannabis strains from $1,600, as the influx increases.

According to co-owner of Guthrie-based Red Dirt Sungrown in Oklahoma City, Tara Tischauer, Falling prices have cut her revenue this year by roughly one-third. Nevertheless, her organization, a family-run enterprise that also runs a hemp farm and greenhouses for garden plants, employs 25 people and consistently cranks out 125 pounds of marijuana weekly.

She asserted that she thought the state’s cannabis sector was still in its infancy, despite a crowded market. Activists have started organizing to get a referendum on legalizing marijuana usage for recreational purposes on the ballot the following year. As a result, the state’s farmers may be better able to meet demand from neighbouring Texas, whose lawmakers have opposed the complete legalization of cannabis, Ms Tischauser said. However, according to critics of Oklahoma’s marijuana policy, that would be a step in the wrong direction. 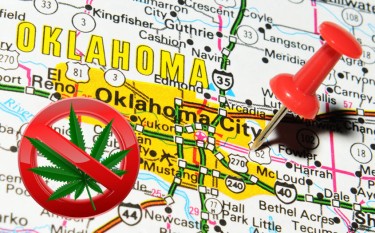 Next Does Cannabis Boost the Analgesic Benefits of Opioids?

Breaking Bud – Are We Messing with Cannabis Too Much?

In recent weeks, energy prices have exploded thanks to several factors. The Russian invasion of Ukraine, the anti-pipeline, anti-development ideology of Trudeau’s federal government. And the massive amount of money-printing that occurred during the pandemic. Supply chain disruptions and too many dollars chasing too few goods have led to this problem. So far cannabis has …

Does cannabis lower your IQ? According to a recent study published in the American Journal of Psychiatry, the answer is yes. According to the research, if you consume from childhood to midlife, your IQ lowers by 5.5 points. You also have memory and attention problems. But how accurate are these findings? Conflicting Studies Many studies …

Of course, 2021 was a great year for the industry, with continued legalization word-wide, including places like Malta and Thailand. 2022 is set to see more of that, and some cannabis predictions for exciting new trends and opportunities are ahead. Legalization It’s no secret that the legalization and decriminalization of cannabis are trending favourably. With …