What Does Canada Day Mean To You? – Cannabis News, Lifestyle

Some Important Things to Know


Are the Cartels Better Of due to the Decriminalization and Legalization of Cannabis in the US?

On August 2nd, 2022 – Sen. John Cornyn (R-TX) was asking a panel of experts on the negative effects of cannabis. For the most part, all of the responses from the medical people in the room was on point. They gave accurate answers which the Senator wasn’t too fond of.

One of this lines of inquiry was about how tobacco causes cancer, and wanting to find the similar response in relation to cannabis – both he medical experts agreed that shockingly there was very little evidence to suggest that smoking weed has any correlation with lung cancer.

Nonetheless, the Senator wanted to highlight this fact and both medical representatives shot him down. Which is why in minute 5:16 – he turned to “Mr. Cook” – who I assume is probably a representative of the DEA or some other law enforcement agency.

The Senator asked the following question;

Senator John Cornyn: “Mr. Cook, my experience and observation with the drug cartels is that they are pretty much “commodity agnostic” umm – they’ll sell you anything that you will buy…umm…why is it that even in those states where marijuana use has been decriminalized or legalized, that the cartels continue to engage in that business and I assume, as you have said, comes along with violence, umm, protecting territory market share…a lot of this connected to street gangs that act as the distribution network for illicit drugs in the United States…could you explain why, if it’s legalized in these states that the street gangs and the cartels continue to be in the business?”

Yes, that was one long ass question, but before I explain to you why they are still in business…let’s take a look at Mr. Cook’s response;

Mr. Cook: “Uh absolutely and thank you for the question…the reality is exactly what you just said and that is we’re not putting the cartels out of business…all we’ve done in States like California and Colorado especially…is put them in a position where they can now move their manufacturing…that is to say “grow operations” here to the United States. Because, under the cover of decriminalization and less emphasis on marijuana, they can now operate huge manufacturing operations. That saves them the cost of smuggling across the border…that is one of the most significant risks the cartels have, you’ve taken that away from them and now they move into the state. They then compete with legitimate businesses who we’d hope to promote and they compete with them at an unfair level because now they are not paying taxes, they are not complying with licensing laws, they are not compliant with labor laws, and now they are distributing the very same product they were at a cheaper price, and where do you think consumers are gonna go? Consumption is up, so now they have an expanded market and a reduced cost. At the same time, the other element of what you just suggested is that down in Mexico, all of the resources that they have saved from not growing marijuana have now been shifted to manufacturing methamphetamines, heroin, and fentanyl, so we’ve given them a double win-win. They are better off in the United States growing, they are better down in Mexico with increased resources, to manufacture and distribute other drugs.

And there you have it, a circle jerk of epic proportions. So let me go ahead and unpack everything and explain to these officials why they are wrong!

Why are Cartels in Legal States?

Firstly, the reason why cartels are in legal cannabis states is not because they are growing “the same as they would in Mexico”. On the contrary, reports have shown that there has been a massive drop on price per kilo in Mexico due to the difference in product.

You see, in places like California and Colorado – the industry evolved and started creating cannabis with different features. Some strains have more CBD than THC, others are grown to optimize THC production. The variety and potency of “US grown cannabis” outcompeted Mexican Brick simply because it was better.

Consumers were more likely to pay $10 a gram than $20 for an ounce of seeds and stems. The gram of potent pot would last you longer, get you higher and have a more pronounced medical effect.

The data supports the fact that American cannabis legalization hurt the cartels since there has been a dramatic decrease in shipments to the United States from Mexico. 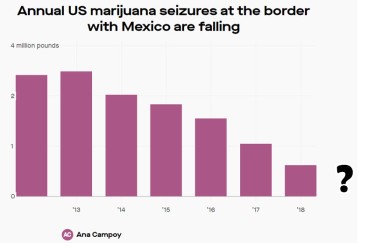 A large part of this is because the cartels decided to move their operations to the northern side of the border. Of course, the chart above shows us that the amount of seizures at the border has declined and this is a good indication that the cartels are shipping less and less marijuana.

It’s also true that cartels have started to grow weed on public lands and some legal businesses are MOST DEFINITELY financed by the cartel. Yet for the operations that remain illegal, they have posed a serious risk to the industry, the public lands, and law enforcement.

In this instance, Mr. Cook isn’t entirely wrong. However, he is wrong in the fact that legalization did in fact hurt the cartels. This is the reason they had to switch up their tactics and migrate to the north where they are competing with the legal industry; however, unlike the legal industry they have law enforcement still seeking them out.

Another thing that Mr. Cook said that was true is that these organizations don’t pay taxes and sell to whomever they can. However, this has always been true. This cannot be taken as a metric for suggesting that legalization has failed.

On the contrary, the fact that the cartel had to adapt their strategy means that legalization does make an impact. Now, the cartels are switching out their cannabis farms for poppies and producing harder drugs.

Yet the only reason why the cartels are still competing with the legal businesses is not because they sell cheaper products (which they do) – but rather, it’s because the government is placing such high and expensive bars of entry.

If cannabis had a lower cost of participation, more people could grow and sell it, which means you’d devalue the crop significantly. At one point, the cost of operations will exceed the potential earnings and thus, the cartel will eventually abandon the illegal growing and selling of weed.

At that point, the smart ones would pivot into the legal industry much like your favorite alcohol brands after the prohibition of alcohol was nullified.

This is at the very least the current theory based on what happened with alcohol prohibition. But in order to do this, you’d need to truly legalize cannabis on a federal level, make home growing legal, and create a marketplace that could directly compete with the cartels – like Farmer’s Markets. I wrote in great detail about creating a “cheaper” cannabis licensing scheme here.

Under Prohibition only the cartels win!

The Senator’s line of questioning was designed to outline how terrible of an idea legalization is. However, the United States has not seen “full legalization”. The fact that other states still have prohibition on the books means that the cannabis commodity has higher prices in these areas. Therefore, creating an incentive for people to violate the law and sell across state lines as well as cartels coming into town to set up shop.

However, when you play the prohibition game the only group who has a chance of winning are the cartels. This is because the more illegal something is, the higher the profit margins.

These people spoke about how cartels are circumventing cannabis laws but conveniently forget how it was the very prohibition of drugs in the 1970s that allowed the cartels to grow their influence and income significantly.

Prohibition will always favor the criminals because when there is a seizure of a particular drug shipment, it only means that the profit margins increase. When there is decriminalization, they have the opportunity to pose as “the rest of us” to circumvent laws and thus the only way to fully take them out is to completely remove all of their money making activities.

At the very least, it is within our power to legalize and regulate all drugs. To make the harsh ones like heroin and fentanyl completely free for human consumption (however, only if you are an addict).

I would even argue, that if you aren’t an addict to heroin, you should also be able to get it legally.

Especially if you are a taxpaying citizen. This is your solemn right as an individual who has sovereignty over their body and mind.

The drug cartels don’t play by the rules and thus the only true way to eradicate their influence is to completely remove all of their money making activities. For kidnapping, extortion, etc – these crimes actually need the same level of zeal as the drug warriors have.

Yet, because cannabis and other drugs are so easy to “bust” and find “guilty people”, those who sit in places of power don’t have a lot of interest in legalizing cannabis or any other drug for that matter.

If Mr. Cook is about the unfair nature of cartels and cannabis, then I strongly recommend we streamline the legalization  process and work on an “anti-cartel division” that would spend all of their resources and energy going after actual criminals.

This can only work if we stop going after consumers.

Of course, this is just us talking about the points and in all likeliness – especially judging by the rest if of the people in that hearing – we won’t see legalization happening fast. Don’t get me wrong, it’s happening as we speak, just not fast enough. 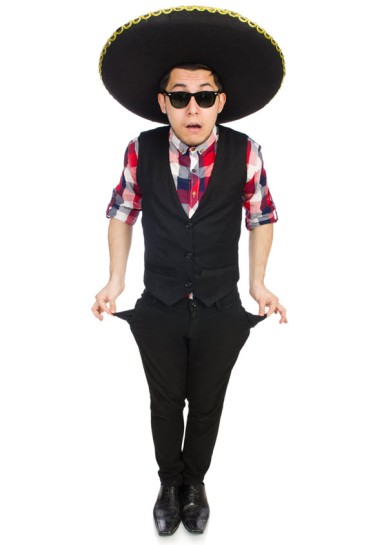 DEA CONFIRMS LEGALIZATION IS HURTING CARTELS, BUT WHY?

Next Cannabis Sales Are Slowing, But Magic Mushroom and LSD Sales Are Booming, What Gives?

Is cannabis recession-proof? During the last major recession in 2008 and 2009, the legal cannabis industry didn’t exist. Colorado and Washington didn’t legalize it until late 2012. Canada didn’t have a recreational sector until 2018. We can look at tobacco and alcohol trends during recessions to make some predictions. But ultimately, we won’t know how …

Now people might call you cool, and you feel cool, but you definitely have never been ‘pressing weed into an album you release’ cool. A fresh edition of Dopesmoker, Sleep’s third album, will do that exactly; having cannabis leaves sealed into the vinyl, it has metalheads everywhere gassed up.   According to the New Musical …

The Emerald Cup is a cannabis event that takes place in Northern California. If you ask the organizers, it’s a celebration of cannabis. Those entered in the contest will say that it’s the final arena. Ask anyone else and they’ll tell you that it’s a really good time.  For the first time in their eighteen-year …

Quebec‘s love for cannabis is now official. Quebecers are smoking more than usual, suggests a recently published survey. According to the data published by the Institut de la Statistique du Québec, one in five people over the age of 15 – 20 percent of the Quebec population – have used cannabis in the past year. …

Various errors can occur in the endocannabinoid system, each causing a unique set of symptoms. Proof for any endocannabinoid deficiency is often lacking, but poor ECS function causes particular conditions according to good science. And the deficit is based on causation and not simply correlation. Raphael Mechoulam discovered anandamide in 1992 and 2-AG a few …