CBD Oil For Dogs: What You Need To Know 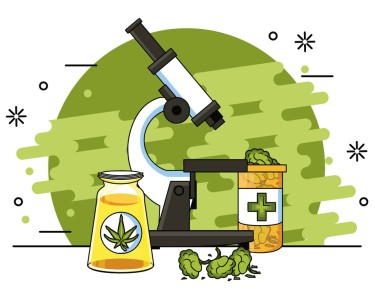 THCV, the most intriguing Member Of The Cannabinoid Family?

Tetrahydrocannabivarin (THCV) is a cannabinoid that many researchers and cannabis lovers have shown significant attention. This rare cannabinoid compound is within some unique cannabis strains in minute quantities. Nonetheless, it possesses attractive qualities, especially from a medical perspective.

Even though THCV is considered a very close cousin to THC, it offers a different experience. THCV is known to stimulate psychoactive effects at higher doses, but in small quantities, users have a clear-headed impact from cannabinoid use.

Until recently, only wild-type and specific landrace strains contained small amounts of THCV. But with the advent of modern hybrids, higher quantities and concentrations of THCV can be extracted. THCV from hybrid strains is also known to stimulate more desirable effects.

This guide explores all you need to know about the rare THCV and highlights specific strains with relatively high quantities of the cannabinoid. Let’s begin!

THCV is quite similar to THC having the same molecular structure and, to a large extent, similar effects. But, THCV has a distinct biochemical property that induces different reactions in the body.

As it turns out, these reactions have a lot of clinical and medical benefits to our overall health. Although, continuous research is still being carried out to authenticate its potential uses. This means THCV may one day be a vital component in new treatments for different kinds of diseases.

The Origins of THCV

The sources of THCV are no different from that of the major cannabinoids, although other compounds are involved. THCV kicks off its journey as one of the two cannabinoids’ precursors, cannabigerovarin acid (CBGV-A).

Differences Between THC And THCV

On a chemical level, the primary feature that differentiates THCV from THC is a 3-carbon group in place of a 5-carbon group in its molecular structure. Regarding psychoactive effects, THCV can be as potent as THC, stimulating a more intense high and psychedelic, although for a short time.

Both THCV and THC are active on the CB1 and CB2 receptors of the endocannabinoid system. However, THCV acts as a CB1 receptor antagonist at a low dose, contrary to THC. This implies that minute quantities of THCV may negatively affect THC’s psychotropic effect.

Low doses of THCV also have counteractive effects on THC side effects such as paranoia, anxiety, excess appetite, and increased heart rate. At higher doses, THCV acts like THC, serving as a CB1 receptor agonist, thus stimulating a psychoactive effect in users.

However, while THC offers intense high and psychedelic at high doses, the effects quickly and rapidly fade away compared to THC. As a result, cannabis strains rich in THCV are regarded as cannabinoids that induce explosive intensity but a short high, absence of any considerable sedative effect.

As things are, lab tests and results have shown THCV to possess plenty of medical potential, but these tests aren’t evidence of accurate clinical applications. Nonetheless, the potential health benefits of THCV have been identified to be appetite suppression, treatment of post-traumatic stress disorder, treatment of stress and anxiety, as well as depression.

More studies in combination with user experience reports must be conducted to confirm these potential benefits.

Legality Surrounding THCV; Does it Show Up on Drug Tests?

No specifics have been identified as regards the legality surrounding THCV. Most countries are still silent on the cannabinoid, given the international Convention on Psychotropic Substances does not schedule it. However, considering it has a similar molecular structure to THC, it might be regarded as equivalent. Hence, if you are in a country with low weed tolerance, you could face prosecution for possessing THCV.

Currently, no specific drug tests have been established for THCV, and whether THCV will reflect on a drug test remains unclear. But banking on the science, THCV being only present in minute quantities does not make it a valuable indicator of cannabis use. Meanwhile, there’s also the possibility that a drug test might mistake THCV for THC, but we still can’t be sure.

As mentioned earlier, THCV is a rare cannabinoid, with most common strains containing less than 1% THCV. This makes THCV expensive to extract in vast quantities. However, a higher percentage of THCV has been discovered in descendant strains of pure Sativa landraces from Nepal and Africa.

Cultivating cannabis strains with higher THCV and low THC percentage is the new challenge many breeders are looking to solve. However, a few strains with high THCV and THC levels are already on the market. When you want to choose a strain high in THCV, pure Sativa genetics is your best bet. But keep in mind that cannabinoid percentage varies from one harvest to the next. Also, note that you need a breeding setup that stimulates tropical climates for better THCV yield.

Cannabis strains such as Jack the Ripper, Doug’s Varin, and Durban Poison have the highest THCV percentage. Strains native to Africa, like Royal Cookies (a descendant of Durban Poison), and Power Flower (a descendant of Jack the Ripper), also have considerable amounts of THCV. A direct interpretation is that no pure THCV extracts or THCV isolates are available on the market.

Interest in THCV continues to grow, but studies regarding its effects have been slow and difficult given its scarcity and outdated laws that govern cannabis. THCV shows potential for medical use, but more in-depth research is still required to ascertain these medical benefits. THCV in itself can also serve as a recreational substance offering an intense but short high.

Will THCV become as popular as CBD and THC in the near future? That’s too soon to tell, but the future has much to offer for all cannabis users.

MORE ON THE BENEFITS OF THCV, READ ON…

IS THCV A NEW DIET MIRACLE DRUG OR JUST HYPE?

Previous Not a Right or Left Issue

5 Graphic Novels All About Cannabis

3 Million Americans Grow Their Own Weed at Home

In recent years, the legal cannabis business has experienced an explosion in both private and public growing. But a number of challenges remain in the way of realizing its full potential, including fending off an organized black market, obtaining financial assistance from governmental agencies, navigating a worldwide pandemic, and now waddling through rising economic inflation. …

Eating edibles seems like a recent development. But did you know that ancient people used cannabis as food during dynastic China? For quite a while, we have known that ancient Chinese villagers used cannabis as a food source. Decades ago, archeologists uncovered texts detailing the P’o Chu-i, a porridge that resembles modern-day congee. The ancient …

In a world replete with and overloaded with data and information, how do we harness insights to explain, forecast and advance the cause of the cannabis industry in Canada? The Buzzword That is Big Data Big data has long been the buzzword across industries. Businesses capitalize on technology to gather more information about their consumers …

Bubba Kush CBD Hemp Flower Bubba Kush CBD is the non-psychoactive version of the legendary “Bubba” marijuana strain. The hemp version was selectively bred from the original marijuana genetics to stop producing THC. This strain is known for its relaxing profile and heavy coffee or chocolate aroma. This evening hemp strain is a great nightcap …