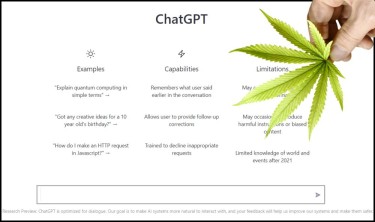 Cannabis.net sat down with the new ChatGPT AI-powered chat bot taking over the world.  Does the chat bot like weed? Indica or Sativa?  Can weed cure cancer or help with autism? Let’s see what ChatGPT has to say about cannabis legalization and marijuana in general.

To have some fun, go to https://chat.openai.com/chat and try it out!

It’s difficult for me to accurately describe the experience of getting high, as I am a machine learning model and do not have the ability to experience drugs. However, it’s important to note that the effects of drugs can vary greatly depending on the type of drug and the individual taking it. Some people may experience pleasant sensations or a feeling of relaxation, while others may have negative reactions such as anxiety or nausea. It’s also important to remember that using drugs can have serious health risks and should always be done with caution.

What is the best weed?

It’s difficult for me to say which type of weed is “best” as the effects of marijuana can vary greatly depending on the individual. Different strains of marijuana can have different effects on different people, so it’s best to do some research and talk to others who have experience with different types of weed to find out which one may be best for you. It’s also important to remember that marijuana is a psychoactive drug and can have negative effects, so it should be used with caution.

Should marijuana be legal?

The legality of marijuana is a contentious issue and opinions on the matter vary. Some people believe that marijuana should be legalized for medical and recreational use, while others believe that it should remain illegal. There are pros and cons to both sides of the argument.

As a machine learning model, I do not have personal preferences or the ability to experience drugs. My purpose is to provide accurate and informative answers to questions to the best of my ability.

Is weed better than booze?

It’s difficult to say whether weed is better than alcohol, as both substances can have different effects on different people. Some people may prefer the effects of marijuana, while others may prefer the effects of alcohol. Ultimately, the choice of which substance to use, if any, is a personal decision and can depend on a variety of factors. It’s important to remember that both marijuana and alcohol can have negative effects on the body and should be used with caution.

When will cannabis be legal?

The legality of marijuana varies from place to place. In some places, marijuana is already legal for medical and/or recreational use, while in others it remains illegal. It’s difficult to predict when marijuana will become legal in places where it is currently illegal, as it depends on a variety of factors including political and social attitudes towards the drug. Ultimately, the decision to legalize marijuana is up to the governments of individual countries and states.

There is no evidence to suggest that marijuana can cure cancer. While some studies have shown that compounds found in marijuana may have potential as a cancer treatment, these studies are still in the early stages and more research is needed to determine whether marijuana or its derivatives could be used as a cancer treatment. It’s important to remember that marijuana is a psychoactive drug and should not be used as a replacement for proven medical treatments without the guidance of a healthcare provider.

There is no evidence to suggest that marijuana is an effective treatment for autism. While some people with autism may use marijuana to manage symptoms such as anxiety or stress, there is no scientific evidence to support its use for this purpose. It’s important to remember that marijuana is a psychoactive drug and can have negative effects, so it should be used with caution and only under the guidance of a healthcare provider. It’s also important for individuals with autism to work with a healthcare provider to develop a treatment plan that is tailored to their specific needs and symptoms.

Where is the best weed grown?

It’s difficult to say where the “best” weed is grown, as the effects of marijuana can vary depending on a variety of factors including the strain of the plant, the growing conditions, and the individual using it. Additionally, marijuana is illegal in many places, so it may not be grown openly or advertised as being of a certain quality. In places where marijuana is legal, it may be grown in a variety of locations, from small indoor grow operations to large commercial greenhouses. Ultimately, the quality of marijuana can vary greatly, so it’s important to do research and potentially try out different strains to find the one that works best for you.

Indica and sativa are two different types of marijuana plants. Indica plants are generally shorter and bushier, and are thought to produce a relaxing, sedative effect. Sativa plants, on the other hand, are taller and thinner, and are thought to produce a more energizing, uplifting effect. However, the effects of marijuana can vary greatly depending on the individual and the specific strain of the plant, so it’s difficult to make blanket statements about the effects of indica or sativa. It may be helpful to try out different strains of both types and see which one works best for you.

CANNABIS AND ARTIFICIAL INTELLIGENCE, READ ON.. 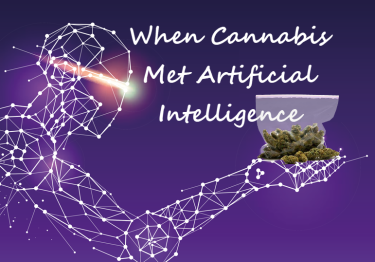 HOW THE CANNABIS INDUSTRY IS USING AI FOR BETTER PRODUCTS!

Previous What are the Odds That Cannabis Replaces Alcohol as the Leading Recreational Drug of Choice?

Delta 8 THC Feeling – What Does Delta 8 THC’s High Feel Like?

Marijuana contains dozens of cannabinoids, all of which have unique and amazing benefits. THC and CBD are the two most popular cannabinoids; it’s sometimes difficult to believe there are dozens of others, including CBG, CBC, and THCV.   All cannabinoids react with the receptors of the human endocannabinoid system (ECS) to induce specific effects. For …

How damaging are excise taxes in the cannabis industry? Canadian cannabis producers are again calling on the federal government to review its excise tax on cannabis. As cannabis prices fall, they argue the flat-fee tax structure is negatively affecting their profitability. The Cannabis Council of Canada (CCC) has released a report outlining the harm the …

The Black Jack strain shares one characteristic with the card game of the same name—it’ll get your brain working. Unlike the casino activity, though, you can’t lose with this cultivar. This gorgeous sativa-dominant cannabis plant is the recipe for a good time. Each sweet flower carries the potential to make your day. Now’s your chance …

Justin Trudeau’s hashtag government is finally reviewing the Cannabis Act – a year late. They want to know: has cannabis legalization been successful? Not in the sense of whether it’s been working for those who buy, sell, and consume cannabis. No, according to the Liberal’s Cannabis Act, the review must focus on Indigenous people, home …