Why THC contributes anxiety in veterans with PTSD


Last week, the head of the largest opposition party in Germany condemned the nation’s intention to decriminalize marijuana and pleaded with the EU to intervene and stop the initiative. According to the Associated Press, Klaus Holetschek, the health minister for a state government in Germany backed by conservatives, met the director-general for migration and home affairs of the EU in Brussels on Wednesday to demand an EU veto.

German Minister Of Health Karl Lauterbach made the proposal toward the end of last month. The Associated Press said that if the proposed policy were to become law, it would decriminalize the possession of a maximum of 30 grams (about 1 ounce) of marijuana and also allow the sale of the narcotic to adults for recreational uses in a restricted market.

According to a June report by the German news outlet Deutsche Welle, Chancellor Olaf Scholz’s government promised several progressive policies when his [Social Democratic Party of Germany] agreed to sign a coalition with the Green Party and the neoliberal Free Democrats (FDP). One of those reforms was legalizing and regulating the cannabis market.”

In June, Lauterbach, a Social Democratic Party member, stated that he had always been opposed to cannabis legalization but that his opinion around a year ago had changed. As Deutsche Welle noted at the time, he expressed his ambition to have a new set of cannabis legislation to propose to Germany’s parliament, the Bundestag, in the later part of the year.”

However, such intentions were thwarted in September when the governing party of the Social Democratic Party (SDP), the Greens, and the Free Democratic Party (FDP) voiced their concerns that the proposal they had developed might not be accepted by European Union judges.

At the time, a German government official remarked that there was a degree of skepticism regarding claims of a breakthrough by the end of the year. The complexities of everything are beginning to set in, and there is a better understanding of the risks involved. According to the official, they don’t want another autobahn toll catastrophe, referring to a plan to create a toll road that was scrapped after the European Court of Justice decided it violated anti-discrimination laws by disproportionately affecting foreign drivers.

Following the public release of his decriminalization proposal last month, Lauterbach stated that the German government would check with the European Union’s executive commission. This is to see if the plan approved by the German authority is per EU regulations and would continue with legislation only if it gets the go-ahead.

According to the AP, under the idea, marijuana could be produced under license and sold to adults at licensed stores to battle the illegal market. People would be permitted to cultivate three plants and to possess or buy 20 to 30 grams of marijuana.”

The idea from the coalition government was denounced by Holetschek on Wednesday, and he asked the EU to oppose it. According to the Associated Press, Holetzek said he told the EU official, Monique Pariat, that the German government’s planned cannabis legalization not only endangers wellbeing, but he is convinced it also infringes European law. He also argued that two EU arrangements enforce Germany and other allied nations to criminalize the production and sale of drugs like cannabis.

Several European nations have decriminalized marijuana, although full legalization is still relatively uncommon. The little state of Malta became the first nation in the European Union to legalize recreational cannabis last year. The new law permits residents to possess up to seven grams of marijuana and to raise up to four plants in their homes.

According to Germany’s health minister, legalizing adult possession of up to 30g of marijuana for adult use and up to three plants for private cultivation might establish a precedent across the European Union.

At a news conference in Berlin on Wednesday, Karl Lauterbach said, “If this law passes, it’s going to be the most liberal proposal to legalize cannabis in Europe, but it would also be the most regulated market. It might be a template for Europe.

The Social Democrat lawmaker stated that the main objective of legalizing cannabis in Germany was to help safeguard young people who were already using the substance in growing numbers after buying it on the illegal market. Instead of increasing cannabis use, Lauterbach added that the goal is to strengthen youth and health protection. He stated that the existing prohibitionist strategy” isn’t working because 4 million Germans have used marijuana at least once in the last 12 months.

When Chancellor Olaf Scholz’s three-party coalition assumed office at the end of the year, it proclaimed its intention to legalize cannabis for recreational use. Still, progress on legislation has been hindered by concerns that such a move would violate international treaties and EU laws. Germany wants to present an overview of its proposal to the European Commission this coming week to reduce the likelihood of a marijuana law being challenged in European courts later on.

Lauterbach stated that the government would not attempt to move through with the legalization of cannabis of the German model if the committee made it clear that it was incompatible with EU law. He stated that a draft bill would be submitted in the first quarter of 2023 if Brussels granted it the go-ahead. The plans detail the legalization of purchasing and possessing up to 20g to 30g of marijuana for adult use and using it in private or public. Personal cultivation of up to three cannabis plants would also be permitted.

Lauterbach stated that the adoption of a general upper limit on the concentration of THC, the primary psychoactive ingredient of cannabis, and the legalization of cannabis edibles like baked products or gums, were both still being considered but were improbable. For those between 18 and 23, a THC upper limit is thought to be more plausible. Cannabis product advertising would be prohibited. The overview document states that a general prohibition on advertising and promoting cannabis adult use applies. Recreational cannabis is marketed without any advertising and in the (neutral) outer packaging.

Although the German pharmacists’ association has spoken out against the drug’s legalization and warned this week that it might force pharmacies into competing with other multiple providers, the sale of marijuana products would likely take place in authorized establishments like pharmacies. According to Lauterbach, the Netherlands, where the cultivation and sale of cannabis are still technically illegal, is taking a different approach to legalizing it than Germany.

Opposition against legalizing recreational cannabis in Germany seems to be gathering momentum. However, the ball is being rolled to the court of European Union judges, as they have the authority to grant or dismiss Lauterbach’s proposal. Only time will tell as the drama unfolds. 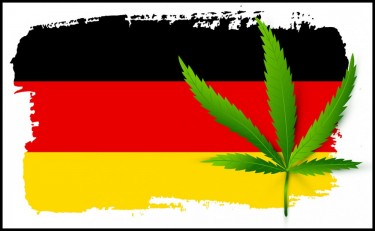 GERMANY LEGALIZES ADULT USE CANNABIS, WILL EUROPE CATCH UP?

Next The Steaks Have Never Been Higher!

Social Awkwardness After The Pandemic   Do you feel lost for words? Millions of other people feel the same way. The pandemic has brought upon the age of awkwardness, from the stress of social distancing measures, the shift to isolating remote work, the lack of facial expressions due to masks. The mask mandates are lifting, …

Ever wanted a pizza with some weed on it? Well, this new Thai restaurant chain recently introduced cannabis pizza to its menu. The Pizza Company is a pretty popular chain in Thailand, and they operate in several other Asian countries, too. Recently, they released a new product called the “Crazy Happy Pizza.” The “happy” part …

In an effort to reduce the stigma surrounding substance use, BC is decriminalizing personal possession. In November 2021, the province made a formal request to the federal government, asking for an exemption from certain articles in the Controlled Drugs and Substances Act (CDSA). Recently, the request was granted. From January 31st, 2023 to 2026, you’ll …

Before we begin – there will be talk of weed! However, in order to make this article be the most effective it can be – Let’s start at the beginning.   For as long as I can remember, I have been working on aligning my unconscious mind with my conscious desire. I first started meditating …