Are Regulations Around Cannabis Drinks Going to Changing? 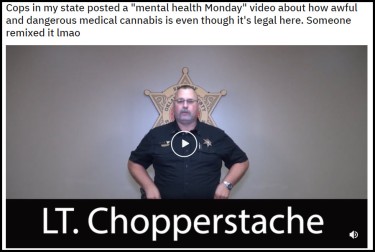 This is how you fight the system

Cops in my state posted a "mental health Monday" video about how awful and dangerous medical cannabis is even though it’s legal here. Someone remixed it lmao from ACAB

There are many ways that you can stand up against the oppression. For the longest time, that act was as simple as sparking up a joint and saying, “Fuck the MAN!” However, now with cannabis becoming more accepted around the world, this form of protest is “less impactful” than it used to be.

Don’t get me wrong, we still have plenty of resistance to legalization and sparking up a doob is a definite “up yours!” to the establishment who wants to keep your weed in the hands of drug cartels. And let’s not forget our old pal, “Mr. State Propaganda”.

That’s right, despite the legalization efforts – the government continues to spend money on studies and “PSAs” that doesn’t expand on the debate but rather empowers their narrative. Of course, now with the internet, people are able to respond quite rapidly.

One of the tried and tested ways of standing up to power is via ridicule. And this is what “someone” did to a PSA provided by their state police. I believe it’s the State of Oklahoma, but irrespective of the state – medical cannabis is permitted within its border.

This is why the person who over-dubbed the footage took such personal offense when the police tried to frame cannabis as this “menace to society”.

Today, I’m proud to write about a masterpiece of “Memetic Weapons” that will degrade the infallible image of the government and make you laugh at the same time.

At first I was like…what is this…and then I was like, “I NEED TO WRITE ABOUT THIS!”

The video starts with a pig waddling in the mud, then to a donut being picked up and finally, the actual PSA comes into a play. An Officer, standing with his hands on his hips and his gut trying to escape from his clothes when the first audible words come into play….

“The number of shithead cops is way up! You see ineffective windbags like me just about everywhere! The thought of me causing you fear gives me a huge boner! I’m Lt. Chopperstache – coordinator of our “beat the shit out of homeless people initiative”.

From this moment you’re already laughing. But it only gets better every passing second.

“Like most violent pieces of shit, our officers are mentally unhinged and ready to unleash our fury on any nearby parties, especially “brown people” and if/or married to them – women – at a moment’s notice!

What I love about this video is the straight up assumptions the voice over guy makes – hitting the nail on the head every single time. It’s like a combination of blows hitting them from all sides. Masterfully exposing the “blue bias” against minorities.

But as you may have guessed it, this PSA will lean heavily into cannabis, so let’s continue to decipher the video.

“We also like punching down…that’s why in this week’s video we’re going after legal users of medical marijuana! Despite our budgets being the only thing more swollen than our fat fucking waistlines – we don’t have shit to do except pick on legal potheads in a legal state…so let me lay it on the line for you potheads…”

Prepare yourself, it’s about to go full throttle!

“I almost never get an erection due to my constant state of near heart-failure…but the thought of enforcing the fuck out of some laws on you – yea, that definitely does the trick!”

Oh sweet Jesus I’m cracking up. This is some of the funniest writing I have seen in a while, and by simply looking at Officer Pork, it’s perfect.

“To me and my boys that card in your pocket” referring to the medical cannabis cards, “is just a license to shoot you in the face and lie about it later…”

At this point in the video, there is a statistic that is being highlighted that states; “40% of the officers surveyed reported that they had behaved violently toward their spouse and/or children in the past six months”.

While I’m not entirely sure where this report is coming from, it certainly is very disturbing that 40% (in 1991) exercised some sort of violent abuse towards their family. Can you imagine what a person who would beat his wife and kids do to you for smoking pot?

Well, the guy who redubbed this video certainly thought about it long and hard. Let’s continue.

“…shoot you in the face and lie about it later – so we look like the victims in the situation.”

At this point, the voice over matches perfectly the voice of the officer in question, and then shit get REAL!

“If you even think about getting depression, anxiety, suicide planning, and psychotic episodes within fifty feet of me or dudes dressed like me – WE’LL KILL YOU!”

But how will they kill us you may ask? Well, Mr. Redub has a few thoughts!

“We’ll straighten the crotches of our Khakis, murdering you in front of your children and then use the card in your pocket to blame you for it! Well, he WAS using cannabis to treat depression and anxiety – I kind of like the ring of that…don’t you honey? **SLAP!

I guess this was a call back to the stat of the 40% of cops beating on their family. This was followed by an audible scream from one would presume the wife of Chopperstache.

“If you or someone you know needs help kicking marijuana addiction – this is of course a term we just made up to discredit people who’s health choices we disagree with – why don’t you call this bogus-fucking-number on the screen. As a matter of fact, why don’t you go ahead and snitch on your entire family too – I don’t even now what this fucking phone number does – IT PROBABLY DOESN’T EVEN WORK – it’s just here to look like we provide services beyond terrorizing people who can’t stand up for themselves…”

I mean, this is pure comedic gold right here. And now, we are closing in on the end of the masterpiece!

“So go ahead and call your family in…I get to beat the shit out of a poor person while you get the unyielding sexual gratification of having a fat man in a nylon suit tell you what a good patriot you are. Don’t forget to GO FUCK YOURSELF you poor pieces of shit…I’m officer Dip Shitlock from the Oklahoma Pigs reminding you that 40% is probably a lot higher because why would a cop’s wife ever be crazy enough to report it to his co-workers?”

It’s at this point when the video ends and you’re left with the satisfaction of the most savage Pig Roast you’ve seen this year.

Why Memetic Warfare is actually effective!

Now that we’ve had the pleasure to go through the entire video, let’s talk about that this parody actually does in the mind of a viewer.

Firstly, the fact that you saw the Parody and NOT the actual PSA means that in terms of “virality” or “shareability” the parody will outperform the PSA. This means that that “anti-message” will be seen by more people and thus the impact of the counter-pig narrative will diminished.

What’s more, if you were to see the actual PSA, you wouldn’t be able to get the V.O out of your head. It was a funny delivery, well-paced and it touched on some actually important topics. The fact that 40% of officers (in that particular study) reported domestic violence perpetrated by themselves is something we should all be alarmed about!

Think about it, if you have people who willfully admit to beating their wives and children, how could you trust the police force? The honest truth is that you can’t. As the video mentioned, the 40% is probably higher because “why would a wife of a cop report him to his fellow swine?”

In most cases, they would justify it and just leave it be because speaking up against someone with the legal authority to throw you in prison  and who historically has his “boys in blue” to back him/her up no matter what…well, this is something that as a society we should be concerned about.

Of course, I’m not suggesting that ALL cops are evil. Unlike the Reddit thread, I actually do know some legitimate cops that don’t like the drug war. In fact, there’s a whole community of ex-law enforcement officers who fight against prohibition – LEAP.

LEAP argues that prohibition doesn’t make things safer, wastes police resources, and only serves to inflate the criminal market. Therefore, I don’t take a staunch hardline approach against cops. I do however, go against “Pigs!” which are the ones who abuse their power, utilize drug laws to oppress those who cannot defend themselves.

Unfortunately, there is a large number of people wearing “The shield” that falls into the latter category. Nonetheless, I applaud the individual who took the time to shit on the PSA in such an eloquent fashion. This is precisely what I mean when I said, “Deep-Art Your Opinion!”

While the individual who created this parody could have easily gone on a Social Media rant, by taking the time to distill that anger, to turn it into a well-thought-out piece of art, millions of people potentially will see this.

This is how you win against people who take themselves far too seriously. Humor is a powerful weapon and the individual who created this video is a master-memesmith!

Previous Why Do All Budtenders Seem to Quit?

On April 19, 1943, a Swiss chemist Albert Hoffman decided to take a trip unlike any other. Bicycle Day Genesis Albert Hoffman, a chemist working in Switzerland, ingested 250 micrograms of LSD. He was so disoriented by the effects that in order to get home, he rode his bicycle and experienced one of the most …

‘Tis the season to get high. If you’re looking for some ideas for a three-course meal this festive season, check out our guide to Christmas cooking with cannabis! We’ll be featuring some of the season’s most popular dishes but with an added twist of how to make them appropriate for a canna Christmas. The Appetizer: …

Vaping has become all the rage in recent times, but there is actually a long history of vaping that far precedes its trendy subculture today. The earliest days of modern vaping were not shrouded in coolness, nor was it as youth-oriented as it appears today. Today, vaping is sometimes viewed as a hobby or leisure …

Is Life Insurance Expensive If You Smoke Weed? (Does Vaping Count?)

Yes, life insurance for smokers is expensive. There are a couple of reasons for that, which this article will provide answers to. However, you can still turn the situation around if you quit. As a smoker, you most likely understand the effect the act has on your health. According to the Center for Disease Control …

On the surface, the Supreme Court ruling on the EPA means nothing for cannabis. On June 30th, 2022, the United States Supreme Court issued its verdict for West Virginia v. EPA. This case involves how an administrative arm of the U.S. government – the Environmental Protection Agency (EPA) – enforces its authority over greenhouse gas emissions. …