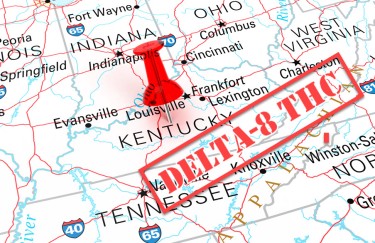 After a year of back and forth and numerous deliberations, Delta-8 is finally legal in Kentucky, although temporarily. This implies that Kentucky residents can use, possess, sell, distribute and produce hemp-based delta 8 products as the new law states.

While this has been happening, the state lawmakers have been attempting to pass a measure to ban all THC isomers, including delta-8. However, this bill was thrown out in March.

Like delta-9 THC, delta-8 THC is a psychotropic substance. It has similar effects as delta-9 THC but has a slightly different chemical structure. Delta-8 is preferred because it has less potent impacts while still producing strong feelings of euphoria, relaxation, and relief.

With delta-8, you can expect a mild “high,” with side effects such as dry mouth, red eyes, anxiety, and slowed reaction times. Although, these side effects only manifest when the drug is misused.

Delta-8 is a relatively new product. It may have unknown risks as it is synthetically produced and hasn’t been explored as much as delta-9. According to research in the Chemical and Engineering news journal, delta-8 products contain delta-9 and delta-10 compounds. It’s safe to say these products are safe to consume; however, the same can’t be confidently said about synthetic by-products used.

Legislative History of Delta-8 in Kentucky

The Trump Administration signed the amended Farm Bill into law in 2018. This bill approved the use, sale, production, and possession of hemp and hemp-based products for every American. Cannabinoids, isomers, terpenes, salts, and hemp derivatives became legalized across the US. This bill also removed help from the list of federally controlled substances. All states then took a stand for or against this bill.

The same year, Kentucky aligned its agriculture bill with the Farm bill through house measure 197. This allowed the use of delta-8 and other isomers until some federal government agencies questioned the legality of delta-8.

In 2020, all delta-8 THC edibles and products were called into question. This resulted in Kentucky and 17 other states reconsidering their position on THC isomers, especially delta-8. Many of these states emphasized safety concerns due to the synthetic mode of producing delta-8.

It was subsequently added back to the state-controlled substance schedule. This move was followed by mixed reactions from vendors, consumers, and concerned residents.

Between April 2021 and February 2022, several delta-8 vendors have had their stores raided and inventory seized by law enforcement agents. These raids contributed majorly to the law action taken by the Kentucky Hemp Association against the state. Since the temporary injunction was signed, the attacks have stopped. But, there is still the question of how long this injunction would hold.

The current state laws in Kentucky prohibit the use, possession, sale, distribution, production, breeding, and purchase of cannabis for whatever reason. The state is one of a few that consider cannabis illegal. In the past, Kentucky lawmakers have proposed bills (House Bill 3 and Senate Bill 40) to legalize medical cannabis. However, both bills fell through at the committee vetting stage.

Another bill that almost scaled through is the proposed House Bill 136. This bill would have legalized medical cannabis without permitting home cultivation and the consumption of dried flowers through smoking. The bill, proposed by Louisville’s Rep. Jason Nemes, made it through the house before the pandemic hit. However, it was stalled and then re-introduced early this year. Unfortunately, the bill was thrown out.

On the other hand, cannabis for recreational purposes is also not legal. In fact, use and possession of weed and pot carry heavy punishments and fines. Depending on the amount of cannabis found on or in an offender, they could be punished by a 45 days to 5 years prison sentence, and/or with fines ranging from $250 to $10,000.

The temporary injunction permits residents to purchase delta-8-based products online and in physical dispensaries scattered across the state. It’s is easy and straightforward to purchase delta-8 online and in stores. To be on the safe side, it is preferable to have a trusted vendor for your delta-8  products, as this would guarantee the quality of your products and ensure you are consuming healthy and safe compounds.

Note that only hemp-derived delta-8 is legal. It must not contain more than 0.3% THC by dry weight, nor should it be derived from marijuana plants. Additionally, it is most preferable to purchase your delta-8 compounds within Kentucky. Traveling to the state with delta-8 is risky and could lead to troubles with law enforcement agencies, especially if you are unable to prove that it is hemp-derived.

The future of cannabis, cannabinoid isomers like delta-8, and other derived products took a hit when delta-8 was banned in 2020. The current injunction makes it possible for customers, vendors, operators, and investors to enjoy delta-8-derived products without fear of prosecution or penalties. Vendors can especially say goodbye to the days when hundreds of thousands of dollars worth of delta-8 got seized by the police.

In other news, delta-8 is not the only isomer legal in Kentucky. Delta-10, THC-O, and HHC are also temporarily legal under state laws. You can find them all in physical retail stores or online.

MORE ON KENTUCKY LEGALIZATION, READ ON… 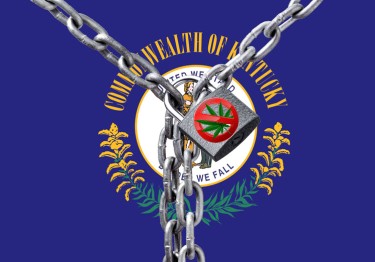 Previous These Are The Best Saltines, Ever!

Next Inflation Finally Comes to Cannabis

Supposing it made sense to cancel Vancouver 420, 4/20/20 and do it virtual. March 2020 was a strange time. We didn’t know any better. But there is no excuse to cancel 4/20/22. Almost everyone has had COVID at this point. You’ve got nearly everyone vaccinated. Some of them three times. Lots of people gonna be …

Is funding a “safe” injection site a good idea from a public policy standpoint? Why is it so hard to find hard data or the official opium numbers? Has the opening of the safe injection site helped in any measurable way? What is driving the increase in opium overdoses since the liberals took over?  If …

It’s a special time of year, all about eating, celebrating, and merrymaking… it’s as if the holidays were made for stoners. Of course, there’s lots of stress involved but lucky we have weed for that. If you could use some extra holiday cheer, look no further. Brighten your spirits with some holiday fails, stupid food …

The Marijuana Opportunity, Reinvestment, and Expungement (MORE) Act passed in the U.S. House of Representatives today. This Act legalizes cannabis federally in the United States. But it must still go through the Senate before coming into law. The MORE Act also protects people with prior cannabis felonies. They can still take part in the legal …