Holiday Cheers To The New CBD Laws in California

What is full melt hash, the star system, and why does it exclude solvents?


Within the last year, there have been different ideas to scale up the cannabis industry. One of the popular strategies was for growers considering identifying geographic locations where cannabis is widely grown. The growers said they got their idea from appellation and terroir designations in agriculture and winemaking.

Terroir is a phrase used to describe the climate, soil, and other environmental factors that affect the production of product batches in numerous sectors, including those that grow hops, coffee, maple syrup, and chocolate. It is widely used by the wine industry, which produces a lot of wine in Northern California. On the other hand, an appellation is a geographical area designated explicitly by law as where wine grapes were cultivated.

Integrating Terroir Into The Cannabis Industry

The French word terroir defines geographical locations, environmental features, circumstances, and influences that impact a plant’s genotype. These elements include soil type and farming methods to elevation and the surrounding area.

The French appellation d’origine contrôlée (AOC) classification, a wine regulation and appellation system in France, is based on terroir’s concept. The basis for the AOC classification is that the grapes exhibit distinctive characteristics unique to that region and its environs.

According to a viticulture and plant physiology professor at the University of California, Mark A. Mathews, the concept of terroir is a myth. In the professor’s book, Terroir and other myths of wine growing, he noted that climate and geographic characteristics could affect plant growth and produce. Mathews further explained that the term Terroir is not precise in its definition and is mainly based on traditional beliefs.

Some of the natural factors that make up terroir are species growing on, in, and around plant plots, soil type, geomorphology, or the natural terrain of the surrounding places such as mountains, valleys, or water sources; climate; and geomorphology.

Integrating Appellation Into The Cannabis Industry

As previously mentioned, an appellation is a geographical area legally recognized and protected to indicate the precise spot where the grapes for a wine were cultivated. However, there are limitations besides geographic ones, such as those governing the permitted grape varieties, maximum grape yields, and alcohol content. Before an appellation name may be legally printed on a wine bottle label, other quality requirements must also be met. The country where the wine was produced determines the regulations that apply to appellations.

For example, the United States uses the American Viticultural Area (AVA). An official appellation is provided by an AVA, which is a certified wine grape-producing region in the United States that benefits both wineries and customers.

Since grapes cultivated in a particular region can have highly different characteristics, wineries want to inform clients about the geographic origin of their wines. Well-informed customers look for specific wines from particular AVAs and wines from those AVAs in general. A special bottle of wine from a famous AVA might fetch high prices and attract a large following of devoted consumers.

The Alcohol and Tobacco Tax and Trade Bureau (TTB), a division of the U.S. Treasury, establishes the borders of an AVA at the request of wineries and grape farmers. At least 85% of the grapes used to manufacture the wine must have been cultivated in the AVA if the AVA is listed on the bottle label. The wine must have been produced and entirely completed in the AVA’s state of origin.

Even more burdensome regulations apply to some particular states. For example, California mandates that all grapes used to produce wine come from the state and that the wine be completed entirely there. 95% of the grapes in a Washington wine must be cultivated in Washington, according to state law.

Relationship between Terroir, Appellations, and Cannabis

The idea of using “terroir” to identify the provenance and environmental effects of a particular batch of cannabis has been discussed several times. Terroir, in the classic sense, would not apply since cannabis is frequently grown in highly controlled environs or using commercial growth medium, fertilizer, additives, etc… In contrast, terroir is focused mainly on the natural surroundings where wine is made.

Furthermore, because there are no N-P-K fertilizer treatments or pH adjustments made to the water or soil while growing grapes, it is impossible to apply the terroir and wine grape cultivation concepts to the production of cannabis. The soil still has its original makeup. The terroir of a particular region would be extolled without fertilizer, amendments, or pH adjustments, which is not ideal for the growth of high-quality cannabis.

Cannabis is manufactured and sold at the state level because it is federally prohibited, making it a regionally produced and controlled item. Many cannabis plants are grown inside, but other areas, like Northern California’s Emerald Triangle, are already well-known for their prolific outdoor cannabis production. As former hemp producers ready their products for adult-use sales, the Hudson Valley area of New York may become increasingly significant.

The proposed appellation’s boundary, facility acreage, the kinds of structures used for cultivation (if any), and a “description and evidence of the legacy, history, reputation, and economic importance of cannabis production in the area” are some of the details that California companies’ petitions for appellations must include, per the final CDFA regulations.

Additionally, following CDFA requirements, requests for California appellations contain details regarding “geographical attributes,” including regional temperatures, altitudes, and more. According to the laws, petitioners must offer “strong proof that the geographical region is different compared to places beyond the proposed border and other relevant locations which grow cannabis for sale into the marketplace.”

Appellations may play a significant role in evaluation and categorization when cannabis gets legalized on a federal level. A cannabis label might easily include any desirable qualities in addition to the suggested basic appellation standards, just like a wine label can specify the location and method of production on a product’s label. Growers in Humboldt County who cultivate indoors and outdoors can also specify the precise microclimate and whether they do it indoors, outside, or in a greenhouse. 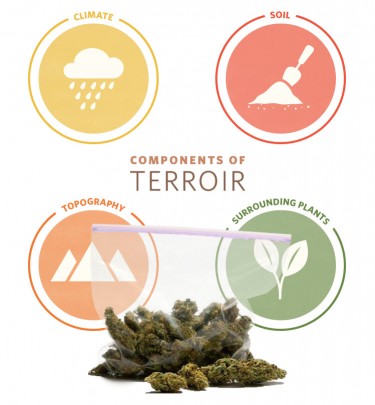 IS TERRIOR THE NEW BRAND OF CANNABIS GROWING?

Previous Why Does Getting High Make Some People Faint? (And Can You Stop It Before It Happens?)

Next Is CBL a cannabinoid

Do Pot Smokers Show Up to Vote?

Does CBD Cure Covid? The Food and Drug Administration doesn’t think so. This past week the US federal regulator issued warning letters to companies making CBD. The FDA claims the companies were making COVID-related claims about their products. This is the biggest federal action against the cannabis industry in over a year. The companies that …

US Federal Health Agency Wants To Know What Barriers Are Hindering Marijuana Research   Last week, the National Institutes of Health (NIH), a federal health agency in the US, published a request for information, reports Marijuana Moment.   Entitled: “Investigators’ interests in and barriers to research studies on the health effects of cannabis and its …

Cannabis strains (cultivars) cause plenty of debate. Seeds from a single variety can express a multitude of phenotypes and profiles. And clones of a single phenotype can mutate and succumb to change. Terpene and cannabinoid profiles can, however, be kept consistent down a long lineage of generations, clone after clone. In fact, genetic stability has …

During the Cold War, a CIA agent had a tough job. They had to secretly engage in dangerous activities while completely avoiding detection, as being caught would result in torture and death. To aid the agents in their endeavors, the Central Intelligence Agency created some crazy spy gadgets. Some of these inventions are so creative …

Last week, the Office of Personnel Management (OPM) announced that it is proposing a cannabis-related reform that can prevent employers and hiring managers from asking about a candidate’s cannabis use habit, provided the applicant has not used cannabis in 90 days, that is, three months. Source link

The Strings Connecting Cannabis and Yoga