Following her son’s death after consuming THC edibles, Delta-8 THC to be exact, a mother in Virginia has been charged with murder, says the police. Two days after a grand jury indicted Dorothy Annette Clements, 30, of Spotsylvania, on charges relating to her son’s death in May, she was taken into custody on Wednesday.

On May 6, while the family was visiting a property in Fredericksburg, Virginia—about 11 miles from Spotsylvania—Clements’ kid was discovered unresponsive. According to authorities, Clements did not bring her son’s help quickly enough. Detectives think the kid consumed a “substantial amount” of the gummies, and according to the police, the boy died two days after the said incident.

According to NBC Washington, an autopsy revealed that THC, the component in marijuana responsible for the psychoactive effect, was the cause of death. According to authorities, a doctor reportedly told officers that the kid would have survived if he had received medical care sooner. After the boy consumed half of a CBD gummy, Clements informed police that she had phoned poison control and that the agents had assured her that the boy would be fine.

However, according to NBC Washington, a cop reported spotting an empty THC gummy bottle in the home where Clements was found, and authorities allege that Clements’ claims do not fit the evidence found. For the murder charge, Clements may spend up to 40 years in jail. Online records reveal that her arraignment is scheduled for November 1. According to Poison Control, children who eat cannabis treats “may experience serious and occasionally life-threatening negative effects,” and they advise parents to keep cannabis products out of the reach of children.

But this is where the plot twist comes in that has the cannabis industry abuzz.  They were not natural THC gummies, they were Delta-8 THC gummies.  Delta-8 THC is made in a lab from hemp or the cannabis plant, it requires solvents and plant decay, and while legal under the 2018 Farm Act, there is not much research done on the Delta-8 THC health effects.

As Brett Puffenbarger of Green Check Verified summed it up on LinkedIn:

Really, the entire story is.

It’s misleading and full of errors.

Delta-8 is NOT THC. It’s a seperate and distinct product.

THC is made by the plant as it grows. It’s part of the natural chemical makeup of #cannabis plants, and has been proven safe and effective in every way (with the two exceptions of a VERY tiny group already suffering from mental health issues experiencing psychosis, and the always controversial Cannabis Hyperemesis Syndrome, neither of which is the case here)

D8 is made when the plant begins to decay. It’s a dynamic state.

Commercially produced D8 is essentially acid washed CBD that is stopped at the exact right moment of decay.

D8 is also under MUCH less regulatory scrutiny. Meaning… most D8 isn’t tested to the same levels of safety as your average D9 product sold in the regulated #cannabisindustry.

What else could have been in those gummies?

Only an autopsy report will tell us, but regardless…

This is the EXACT black eye for the industry that myself and many others have warned about in regard to these synthetic and semi-synthetic cannabinoids.

The story gets a little weird past this point.

At the end of the day… I probably do agree this mother should be charged with neglect and potentially manslaughter or murder no matter what the true cause of death was.

What happened to this child could have and should have been prevented.

My issue here is simply with the misleading headlines blaming THC and therefore all of the hard working people and companies who aren’t peddling the bathtub Gin of weed.

I guess my issue is also with the continued allowance of and production of these potentially dangerous compounds being sold under the banner of cannabis.

The consumers are buying them to fill the gap created by prohibition, not because they actually want them.

The producers of these products are clearly and willfully putting their profits over the health and safety of consumers.

This is (nearly) equally their fault as it is the fault of the mother.

Anyone else angry but not suprised?

Anyone else making it their life’s mission to correct every single post or comment calling it THC?

According to Dr. Jill McCabe, a pediatric emergency department physician at Inova Loudoun Hospital, any THC can be harmful to children. In addition to hallucinations, low blood pressure, and an abnormally slow heart rate in severe cases, side effects for children who eat THC edibles can include vomiting, difficulty walking, dizziness, increased heart rate, drowsiness, breathing problems, and confusion. Even though symptoms might not appear immediately after consumption, the group advises parents and caregivers to contact poison control.

Specialists believe that a significant factor that makes THC edibles particularly harmful to leave near kids is their appearance. The packaging of the gummies is frequently not childproof, and given their similar appearance to candy, once kids have access to them, most are likely to put them in their mouth and eat them, Dr. Jill McCabe told NBC Washington.

If kids eat them, McCabe advised parents to call 911 immediately and get them emergency care if they are having a seizure, very lethargic, difficulty walking, difficulty breathing, or experiencing recurrent vomiting. The cautions come from several recent incidents in which kids who ate foods spiked with THC ended up in hospitals.

Three young children in Virginia contracted an illness in April 2022 after eating “goldfish crackers” that contained THC. After turning herself in to the police and having her daycare license seized, the 60-year-old professional home day caregiver for the children was convicted of three charges of abuse and injury to children. While addressing the case, Sgt. Jim Gerhardt of the Colorado Drug Investigators Association affirmed that the caregiver should know better that kids can accidentally get into this stuff. Or a nanny might accidentally feed a toddler something from the pantry. This has become a significant issue because those accidental problems are increasing.”

Another case featuring at least two kids, ages 5 and 11, was admitted to the hospital in 2020 after consuming the THC-laced candy “Medicated Nerds Rope” from a Utah food bank. The mother of a 5-year-old boy was detained for child endangerment a year prior after her son took THC-laced sweets to his Cleveland elementary school, resulting in the hospitalization of nine kids. Also in 2018, a 12-year-old boy was accused of passing out marijuana-laced gummy bears during gym class to at least five middle school students in Florida, who were then transported to the hospital.

Medical professionals claimed that the 2015 death of an 11-month-old baby boy in Colorado was the first reported pediatric death associated with cannabis. However, the infant was officially reported as having passed away from an inflammation of the cardiac muscle (myocarditis), and other medical professionals questioned whether cannabis was to blame.

Actions To Take When A Child Ingests THC Gummies Accidentally

According to McCabe, a phone call to Poison Control at 1-800-222-1222 might be sufficient if the child is exhibiting mild symptoms. However, she noted that any severe symptoms, such as nausea or drowsiness, call for immediate attention. McCabe added that seizures, trouble walking, extreme lethargy, or continuous vomiting are all reasons to call 911 immediately. Send your child to the closest emergency room if the kid experiences any symptoms or a combination of these symptoms.

According to Poison Control, other typical adverse reactions that kids may suffer include a fast heartbeat, lethargy, disorientation, hallucination, an abnormally slow heartbeat, and low blood pressure. Recent studies also suggest that children below the age of 10 who consume THC edibles are more likely than older children to need hospitalization and respiratory support.

Poison Control further claims that children who consume THC gummies or other marijuana-infused products frequently experience a number of common symptoms, such as vomiting, tiredness, difficulty walking, confusion, a rapid heartbeat, and breathing problems. It is advised to get in touch with Poison Control if a youngster has consumed the chemical for additional guidance.

Some states have prohibited these gummies to limit kids’ exposure to THC, while others have attempted to restrict them. During this year’s legislative session, Virginia’s legislators struggled with controlling the sale of commodities containing delta-8 while also regulating products containing THC. Despite vehement opposition from the hemp sector, they were unable to agree. A state committee has convened to discuss ideas for the upcoming session.

The Food and Drug Administration issued a warning about delta-8 THC-containing products last year, saying they “have not been studied or authorized by the FDA for medical use in any circumstance.” The organization reported receiving 104 reports of unfortunate incidents with goods containing delta-8 THC between December 2020 and February 2022. 2,362 incidents of exposure to these products were reported to national poison control centers during the same time, including one juvenile case categorized as having resulted in death, according to the FDA. 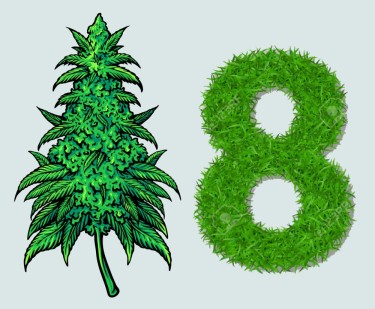 WHAT IS DELTA-8 THC AND IS IT LEGAL OR NOT? CLICK HERE!

Next 5 States That Could Legalize Weed This Week?

War and Peace and Cannabis

Health Canada wants to end medical cannabis in Canada. They’ve opened up a survey for Canadians to input their opinions. But as is usually the case with these things, the decisions have already been made. “They’ve always been disingenuous when they put these sorts of surveys out,” says Ted Smith, long-time cannabis activist and contributor …

Turns Out Cannabinoids Are Responsible for Our Runner’s High

Recently, a group of scientists found out that our body’s natural cannabinoids are responsible for our runner’s high. For the longest time, we thought that endorphins caused “runner’s high” — that feeling of bliss when we run. But research in the past two decades revealed that endocannabinoids might be the primary cause of this high instead. A …

Study Reveals Surprising Public Health Benefits Of Legalizing Marijuana   Legalizing marijuana is one of the best things we can do to support public health.   There have been several studies conducted of many counties and cities in the United States supporting its many public health benefits. Many are worried that legalization of marijuana is …

Why Medical Marijuana Patients Should Consider Cannabis Suppositories The world of medicinal cannabis is widely changing as the day goes by. New pharmaceutical innovations are being introduced to further benefit patients and increase compliance. One such is the cannabis suppositories. While it is understandable that many can be a bit reserved about the prospect of …