Does Your Medical Marijuana Card Work in Other States?

Labor Day in the Marijuana Industry

Could CBD Help Patients With Alzheimer’s?


Given the potential harm to a child’s developing brain and the lack of available evidence, most Canadian pediatricians are reluctant to recommend medical cannabis to their patients. However, pediatricians also report receiving more parents’ requests for cannabis for an increasing number of ailments.

According to the medical director of the pediatric palliative care unit at the Hospital for Sick Children in Toronto, Dr. Adam Rapoport, the increased demand for medical cannabis for kids is primarily driven by parents. Laura Kelly also agrees with Dr. Adam, affirming it is happening and pediatricians are just playing catch up.

Kelly is a pharmacologist and the scientific director of the national research organization Canadian Childhood Cannabinoid Clinical Trials. Her team is working hard to come up with responses to queries about cannabis for adolescents. According to her, the primary challenge is that adolescent cannabis use has surpassed the supporting evidence.

In a 2017 poll, 50% of pediatricians reported having at least one patient who had consumed cannabis for medicinal purposes in the previous year. However, cannabis consumption does not result from prescriptions. Only 4% of pediatricians said that they had approved the use of medical marijuana for one of their patients.

Lack Of Solid Research For Many Conditions

Since the conclusion of the 2017 poll, many pediatricians like Dr. Daniel Flanders, head of Toronto Kindercare Pediatrics, claim that demands from parents have increased in regularity and variety. According to Flanders, he is approached about medical cannabis for children at least twice a week for conditions such as mental health disorders, chronic pain, arthritis, ADHD, and insomnia.

Meanwhile, according to a poll, only 4% of pediatricians have authorized the use of medicinal cannabis for their patients. Furthermore, regarding cannabis use for children, the science is only solid in a few instances. A pediatric neurologist in Toronto, Dr. Evan Lewis, says there is compelling evidence supporting cannabis use for children in certain seizure conditions such as Dravet syndrome, Lennox-Gastaut syndrome, and tuberous sclerosis.

He cited many highly published randomized controlled studies and a recent comprehensive review of the research on medical cannabis for complex pediatric seizure disorders. Outside of that, he claims, it is basically extrapolating from the data and relying on weaker supporting data from the literature. However, that hasn’t stopped some parents and doctors from pushing the limits. In some circumstances, Lewis says, it’s a path worth traveling.

As things stand, Lewis now prescribes cannabis for different forms of seizures and permits its use in a limited range of circumstances for a variety of ailments. These ailments include migraines, concussions, sleep issues, autism, tics, movement abnormalities, and behavioral problems in adolescents with neurological conditions. It is also used for symptom management in chronic pain disorders, palliative care, spasticity, incurable cancers, and ADHD in Canada.

However, Lewis claims the study is not as comprehensive as he would prefer and does not exist in many situations.

Another challenge with cannabis use for children is that the standard dose has not been established. As a result, experimental cannabis regimens frequently use pure cannabidiol (CBD), a non-psychoactive component of marijuana. However, b Because this form of CBD-only formulation is not available in Canada, doctors often recommend medications that include both CBD and the psychoactive ingredient delta-9-tetrahydrocannabinol (THC).

Meanwhile, a pediatric neurologist at the University of Saskatchewan, Dr. Richard Huntsman, together with his team are working to find a solution to the issue of dosage regimens for children with complex seizure disorders. In addition to defining a target dose utilizing oils, his study assessed THC and CBD levels in the blood, which remained low. The oil used in the study was in CBD to THC ratio of 20:1.

“People are really concerned about their children becoming high,” Dr. Richard Huntsman says. Still, according to these findings, this is “not so much of a concern,”, particularly in this community.

Contrary to popular opinion, he also discovered that the medicine appeared to improve rather than impede cognitive function. He is cautious, though, and points out that the research was conducted on a limited number of children.

However, she claims that she regularly advises teenagers in her Hamilton clinic that using cannabis as a form of anxiety or depression treatment is not intelligent. “The effect is the opposite,” she argues, pointing out that one-sixth of kids who explore cannabis, including for self-medication, suffer from cannabis use disorder.

While physicians anticipate the guidelines, Kelly says her research consortium has initiated five latest clinical trials of medical cannabis in children, and other Canadian research teams are scrambling to catch up. “I absolutely do not believe it is a panacea. It isn’t magic. However, there are some fields that show promise that are worth investing in,” Kelly argues.

Nonetheless, pediatricians have a responsibility to their patients to stay informed about the latest research and developments in the medical field. This includes keeping up with the growing body of evidence that suggests the benefits of medical cannabis for children. They must remain open-minded and willing to consider this treatment option for their patients in consultation with their families and other healthcare providers.

The use of medical cannabis in children is a complex and controversial topic, and pediatricians must approach it with care and caution. However, pediatricians must also be willing to challenge their biases and consider all options for improving patients’ health. The growing demand for medical cannabis in children is a reminder that we must always be open to new possibilities and willing to evolve our practice in the face of new evidence.

KIDS AND WEED, READ ON… 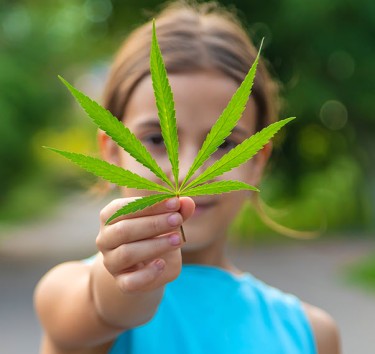 YOUR KIDS JUST ASKED YOU ABOUT WEED, WHAT SHOULD YOU SAY?

Previous CBD and THC Crossword - Do you know the difference?

Next Cashless ATMs May Disappear, But You May Not Have to Bring Cash to a Dispensary After All

CBD vs Hemp Oil… What’s the difference between both?

Dabs and joints waste an equal amount of THC, depending on the cited study. Despite the results, both mediums can be and have been vastly improved upon. Thanks, stoner science! For instance, dab rigs come in many forms. Terp slurpers are a recent innovation that provides a delivery method for consuming extracts that will waste …

Does CBD modulate the effects of THC? No, says a new study. For years, both experience and research have indicated that CBD has a mitigating effect when consumed with THC. For example, budtenders suggest a THC-strain balanced with CBD for new consumers to avoid overwhelming them. When an experienced stoner has eaten an edible or …

The ancient world was full of drug use and narcotics and today this hasn’t really changed. However, the drugs back then were different from our modern-day supply. Every drug came from the surrounding environment and most of them packed a heavy hit. Test your knowledge of drug use way back in the day; learn all …

Low Dose THC Combined with Therapy Is Effective for PTSD, Says New Study   Post-traumatic stress disorder (PTSD) is a serious mental condition that affects some people after they have experienced or witness an event that is shocking, traumatizing, or dangerous.   While most people can recover from the intense emotions that come with facing …