Terpenes in Novavax and Gavi vaccines, from tree bark and shark livers


It is typical for youth to use marijuana because they believe it makes them appear cool. While cannabis overdoses are not the worst consequence of weed legalization —a ridiculous fallacy, if we must say—instead, it’s that weed has lost its overall cool.

This is not us advocating that children should consume marijuana recreationally, but how things have changed. Cannabis was once the drug of choice for the youth, entrenched in the Youth Summer of Love, the hippy movement, and college dormitories across the country. However, the concept of marijuana as a cool substance is disappearing because of legalization.

According to Harvard Community College researchers, cannabis can make certain people “less cool.” So, what does cannabis symbolize now as a culture, a way of life, and a lifestyle? Do kids think it’s cool anymore? Does anyone still think weed is cool?

Details Of The Experiment

According to a new survey issued by Harvard Community College based in Santa Monica, California, consuming cannabis does not make the consumer “cool.” The study published on Thursday revealed that, in reality, weed could make people “less cool” depending on their environment, income, hygiene, and IQ.

The study included 374 test volunteers between the age of 12 to 99, all of whom claimed to consume cannabis frequently (3+ times per week). They were quizzed on topics such as “Why do you smoke?” “What employable talents do you have?” and “When last did they floss?” In addition, subjects were asked to bring pictures of their apartments for the research team to evaluate.

The study’s chief scientist, Dr Wallaby Frank, revealed to High Times that the inspiration for the study came to him while watching Dazed and Confused.” ‘Say, dude, you got a joint?’ says Matthew McConaughey’s character, and Mitch replies, ‘No, not on me, guy.’ ‘It’d be much cooler if you did,’ says McConaughey.

In his words, Wallaby thought, shouldn’t Matthew McConaughey, the pinnacle of cool, already have a joint on him? So he became enthralled with the concept of ‘cool’ and what it truly meant, particularly regarding cannabis.

Frank and his team of four other researchers conducted an interview with each subject and then assessed each subject’s responses and judged them based on their overall appearance and responses. Anyone who claimed to smoke because it’s trendy was instantly labelled “uncool,” according to Frank. They also put a huge giant red stamp on individuals below the age of 18 because they are youngsters and barely have a well-developed brains.

Other telltale indicators of “uncoolness” related to cannabis use include, but are not limited to, earning less than $35,000 per year, having more than $10,000 in debt (excluding mortgage), and being unable to play the piano. More indicators include:

Many people believe that just because they smoke marijuana, they are cool. However, this is inaccurate, another researcher who worked on the paper, Jill-Rose Neemoy, stated. Do you know who also uses cannabis? Narcs.” When asked why she smoked, one participant responded, “Life’s a bitch, and then you die.” Others deemed “cool” had a genuine interest in the plant and knew all sorts of trivia about weed classifications, cannabinoids and the cannabis industry in general.

Frank’s interview with High Times revealed that the study was exceedingly tough to measure. He and his colleagues would all agree that this man is cool when he walks in wearing nice clothing and smelling like smoke, you know, with a massive smile on his face. However, when we would ask him a straightforward question like, “When did World War I start?” he would fail to respond, which made him appear less cool.

On the other hand, Frank added, someone else would walk in dressed like a hippy, with no shoes and sticks in his beard, but then he’d go into free jazz, theoretical statistics, and endocrinology.” By the conclusion, Frank affirmed he thought to himself if he was the one doing the study or if it was the individual.

The results eventually came back evenly split. However, a 50/50 split in the results did not satisfy the researchers, so Dr Wallaby Frank enrolled himself as the 375th volunteer.

Dr Frank is a remarkable person, according to Neemoy. He earns more money than we do, which is excellent. We saw pictures of his condo, which was spotless and well-kept. He’s hilarious and intelligent. However, in the end, we opted to categorize him as uncool, purely because it is probably one of the least cool criteria you could do to judge someone based on their appearance and whether or not they are aware of the start of World War I.

Neemoy continued, to be fair, Dr Frank was entirely in agreement, and the rest of us would have fallen into the same category had we taken part in the study.

Cannabis is no longer for the exclusive cool kids club. Elon Musk uses it, moms do, and most Canadian police, following the new law, can use it (off-duty, of course). Since 2006, there has been a twofold increase in Baby Boomers using it. Monthly marijuana users among people 65 and older have also significantly increased (that number was nearly zero in the mid-2000s). Everyone you previously wouldn’t have considered consuming cannabis is now doing so. Maybe the OLCC could do better to caution teenagers about lighting up with their grandparents.

With legalization pushing cannabis to the mainstream, it’s safe to say that most people now use cannabis. Hence, there’s the need to redefine cool as regards cannabis. As per Dr Frank and his team of researchers, smoking cannabis does not make one automatically cool. To be worthy of that tag, there’s now the need to know more and be vast in the knowledge surrounding cannabis and the cannabis industry as a whole

DOES CANNABIS MAKE YOU SMARTER, READ ON… 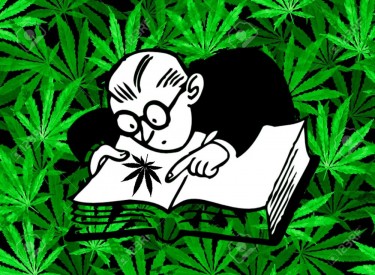 A Man Cave of Hempcrete? – Hemp-Concrete Approved for US Residential Construction

What is Ego Death? – A Look into a Popular Reason Why People are Taking Psychedelics

On Dec. 9, global color authority Pantone introduced Very Peri, a new blue shade (PANTONE 17-3938), as the Pantone Color of the Year selection for 2022. A dynamic periwinkle blue hue, Very Peri has “a vivifying violet red undertone blending the faithfulness and constancy of blue with the energy and excitement of red. This happy …

The Supreme Court of Canada will rule on whether Quebec‘s ban on growing cannabis for personal use is constitutional. Janick Murray-Hall v. Attorney General of Quebec will be heard on Thursday, September 15. Quebec’s Cannabis Growing Ban  How did Quebec end up the odd-duck out with their home-growing cannabis ban? In 2018, the federal government …

Justin Trudeau’s hashtag government is finally reviewing the Cannabis Act – a year late. They want to know: has cannabis legalization been successful? Not in the sense of whether it’s been working for those who buy, sell, and consume cannabis. No, according to the Liberal’s Cannabis Act, the review must focus on Indigenous people, home …

The BC Craft Farmers Co-Op shouldn’t have to exist. For decades, British Columbia has been Canada’s natural home of cannabis. Thousands of small farmers have cultivated high-quality and potent cannabis known as “BC Bud.”  But the federal government’s overregulation of cannabis, and the BC government’s lack of backbone, means thousands of these farmers are still …