Legal Cannabis Banking in the US – Cannabis | Weed | Marijuana 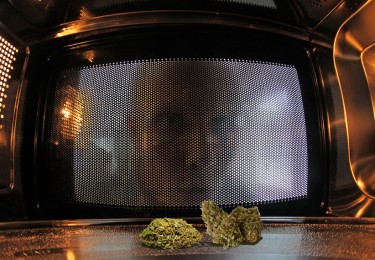 Putting marijuana in the microwave is completely unnecessary, regardless of what you might see on the internet and what videos are popular on social media.  Snoop puts his blunts in a microwave before you smokes them? Is it true or urban legend? Did that story start all the microwave cananbis talk?

Yes, your marijuana can be microwaved. But simply because you can doesn’t mean you should, as is the case with many other things you are capable of doing.

Food isn’t actually cooked in a microwave; rather, the microwave excites the molecules of the food by the vibrating water molecules inside of it. The microwave warms the food outside, while heat transfer from the outside warms the inside.

Although most individuals have a 900–1,000 watt microwave, the typical microwave’s wattage ranges from 600 to 1,200. How quickly anything heats up in your microwave is directly influenced by its wattage; a higher wattage corresponds to a quicker heating process.

The cannabinoids have a low boiling point and they are mostly responsible for the high. THC has a far lower boiling point than CBD (356F compared to 315F for THC). Therefore, heating up your marijuana in the microwave runs the risk of destroying its active ingredients, such as THC, and leaving you with a harsh, dry bud that doesn’t provide the desired high.

DOES MICROWAVING INCREASE THE POTENCY OF WEED

Using the microwave to cook your marijuana not only destroys the terpenes but also puts the cannabinoids in danger. By causing the water molecules in the herb to vibrate, microwaves raise their temperature. This may cause the release of volatile substances like terpenes, altering the flavor, aroma, and perhaps even the effects of your weed.

CAN YOU KILL MOLD WITH MICROWAVING

No, it doesn’t. Even while some mold may be killed by microwaves, mold can still harm your health even if it isn’t active. Despite having been in the microwave, mycotoxins can still exist. Whether it has been microwaved or not, do not consume or smoke moldy cannabis.

You require gamma radiation, which microwaves don’t use, to eradicate mold on marijuana without harming the cannabinoids.

There is very little scientific evidence to support the claim that you can decarb your marijuana in your home microwave, but some commercial marijuana extraction procedures do use microwaves for the purpose of decarbing.

Your microwave’s high heat output initiates the decarboxylation reaction, which converts the acidic cannabinoids into their neutral versions. However, have you ever microwaved food only to discover that some parts are still chilly and others are scorching hot? The same thing might occur when using your microwave to warm your cannabis. The decarboxylation of your marijuana will be uneven if you use the microwave because it doesn’t always heat things evenly.

Your lighter will take care of the decarbing if you’re rolling a split or a blunt. Before smoking, there is no requirement that you decarb your marijuana.

CAN EDIBLES BE MADE IN A MICROWAVE

To reiterate, heating your marijuana at best can only result in uneven effects. The greatest or most potent effects won’t be obtained if you heat your marijuana or infuse butter in the microwave. Cannabutter can come out of a microwave with one side scorched and the other undercooked because of the microwave’s famed inequity in cooking food.

Additionally, there’s a chance that heating will destroy the beneficial terpenes and cannabinoids. A much better technique to create edibles with the perfect hit is to use an infusion machine or a tried-and-true infusion method.

Go ahead and warm up an already-prepared food item, such as a biscuit or a brownie, in the microwave. A maximum of fifteen seconds should be given to the item before removing it. The edible already contains decarbed marijuana, so a quick microwave session won’t significantly alter the edible’s chemical makeup.

THE EFFECTS OF MICROWAVING CANNABIS

By decarboxylating, also known as decarbing, the chemicals in weed after microwaving, the properties of the plant material can be changed. In other terms, it can change one substance into another, and the new substance usually has more potent effects. It transforms tetrahydrocannabinolic acid (THCA) into tetrahydrocannabinol, for instance (THC).

When marijuana is cooked to elevated heat of about 100 to 120 degrees Celsius, this process takes place. The heat facilitates this process more quickly. This process of decarbing can still happen naturally without heat, but depending on how the cannabis is stored, it might take a few weeks to months.

THCA is often regarded as inactive because it cannot produce a traditional “high,” even though it may have certain therapeutic benefits, showing that it can interact with the human body. Cannabis users can be assured of experiencing intoxicating effects by converting THCA to THC.

The cannabis should not be heated for an excessive amount of time, and it should be properly kept thereafter. Compounds like THC can decay as a result of overheating and improper storage, which reduces the product’s effectiveness. After decarboxylation, marijuana should always be maintained in an airtight jar out of the way of heat and light.

According to rumors, Snoop Dogg microwaves his doobies before smoking them. Every stoner, including Snoop, is free to use cannabis anyhow they like. However, there is no scientific proof that heating cannabis in a microwave is advantageous, and doing so too long can potentially weaken the bud’s potency.

Snoop is somewhat correct when he says that the microwave “tightens” things up and “locks” the flavor in. Any remaining water in the wrap of the blunt will evaporate in the microwave due to the excitation of water molecules, resulting in a tighter wrap. But the flavor he’s referring to probably comes from terpenes evaporating into the air, not from his lungs.

CANNABIS IN THE MICROWAVE, READ MORE… 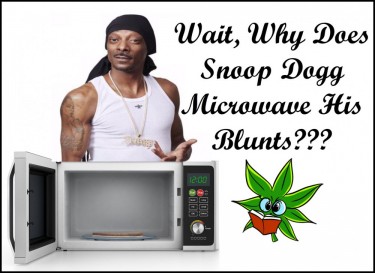 WHY DOES SNOOP MICROWAVE HIS BLUNTS, READ THIS!

Previous CBD is Coming to Your Dentist's Office

Next Don't Ask, Don't Tell Is Back? - Federal Job Applicants Don't Have to Admit Weed Use Unless It Was in the Past 90 Days

There’s a famous saying, “Necessity is the mother of creation”, and nothing could be more true for a drug smuggler. When it comes to sneaking in drugs, a smuggler has to call upon all their inner creativity. Sometimes, a bold move can be so brazen that it just happens to work. When it doesn’t, getting …

Nevada Judge Orders State Board to Remove Cannabis from Schedule 1   A Clark County Lower Court ruled on Wednesday that the Nevada Board of Pharmacy must eliminate marijuana from a list of prohibited substances considered to be severely misused after over two decades of breaking state law. Although marijuana is now legal in Nevada …

Craft cannabis on Canada’s shelves in the legal hemisphere is an arguable term due to the inevitable fate much of the product undergoes. Corporate companies skip costs which sadly undermines quality as well as viability in the long run. In a $38M deal, Terrapharma, parenting Being Cannabis and Greybeard under Thrive, sells out so Aurora …

During the period marijuana had just got decriminalized in Thailand, one gram of the marijuana strain UFO cost the equivalent of slightly over 10 euros. Additionally, the consumer is promised the high effects of the drug in the price list of Bangkok’s “Highland Cafe”: Chill Alert.    Bangkok’s ‘Highland Cafe’ is one of the very first …

Whether you want to feel energized and creative or relaxed and comforted, there’s a CBD flower strain for you! Each strain delivers some unique effects to your mind and body, so there’s a perfect strain for just about every situation. If you want to feel soothed, sleepy, and satisfied, you should look for an Indica …