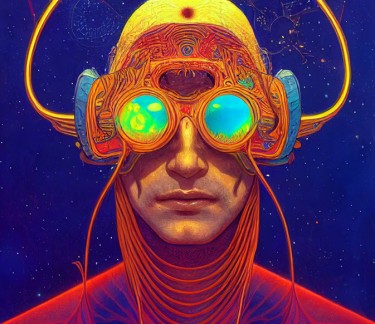 The metaverse is the in-thing at the moment and it seems like everyone is getting their bit of it. A Miami-based psychedelic startup called Ei. Ventures recently announced that it will be getting in on the act. In its announcement, it disclosed that it had acquired a virtual land estate in The Sandbox. This space will be used by clinicians as they look to host therapy sessions on psychedelics in the metaverse.

This is definitely novel in a sense and there is much background to this new announcement. Read on as we expatiate on the background story about the announcement and what we can be expecting.

For those that are not familiar with The Sandbox, it is a virtual world where players create, own and monetize items on the Ethereum blockchain. Examples of items and experiences used in this world are NFTs and it is done over the Sandbox marketplace. The Sandbox itself is a branch of the popular gaming venture Animoca Brands which is based in Hong Kong. Virtual lands for meetings are also available on the platform for different groups to actively engage their audience which is what Ei. Ventures are keying into.

Ei. Ventures made the purchase of the 12-by-12 estate in The Sandbox alongside its parent company Orthogonal Thinker. The deal goes down as the third-largest virtual land sale in the metaverse and it is valued at $2.22 million. The parcel is set to be called PSLY.COM, which is the purported name of the merged company of both Ei. Ventures and Mycotopia Therapies. The estate consists of 144 pieces which makes it a sizeable investment by the companies and it looks set to be a monumental feat.

In an email, David Nikzad, the CEO of Ei. Ventures describes PSLY.com as an upcoming utopian space in the metaverse. He believes it will be important towards empowering people in a unique and dynamic way. The metaverse in itself is the future of interactions and communications and David believes it will help to improve how psychedelic therapy is rendered. Many moguls across different strata are already pitching their tents with The Sandbox and this is seen with some of their investments. Several land purchases on the Sandbox have followed the trend of Ei. Ventures. Atari purchased a record land of $4.3 million on the Sandbox metaverse which made headlines across mainstream media last November. Rapper Snoop Dogg and Hong Kong property tycoon Adrian Cheng have also recently made announcements about their plans to acquire lands to create their own worlds on the platform.

According to Nikzad, the decision to move over to the metaverse didn’t take long as just after a week on the Sandbox, he started seeing the future of psychedelic therapy on the platform. This is what birthed the move to take the combined effort of Ei. Ventures and Orthogonal Thinker onto the metaverse. This move by the two firms will give billions of people access to psychedelic therapy which many have been craving for. It also comes at an opportune time for Ei. Ventures as they are moving into a new phase of production. The firm is set to develop a psilocybin transdermal patch for clinical therapeutic applications. This is just one of the latest developments of the firm as it looks to scale up as the CEO has explained.

The plans for the therapy sessions to hold on the platforms are still in the formative stage but there are some things that we can take away and hold on to for now. Nikzad explains that the company hopes to create a tremendous virtual reality experience for its intended audience when the program kickstarts. It will also feature virtual experiences of Hawaii, healing modalities, positive psychedelic trips and so on. Proper information and interactive sessions from experienced users will also be available.

A standout feature that the company plans to use the metaverse to achieve us guided therapeutic trips alongside the therapist in the virtual world. This will be a unique application of psychedelic medicine which is yet to be tapped into in recent times. This feature is intended to be applied in areas with legal psychedelic drugs such as Oregon and Jamaica. You can be sure that this new feature will attract the interest of many psychedelic users across different regions. This is because many have been victims of bad therapeutic trips due to the fact that they had no one to properly guide them and help them through it. With this new feature, those days can now be a thing of the past for most.

Gone are the days when people look down on psychedelics as a meagre and substandard sector in the economic view of things. Now it is classified under health and wellness following its growing acceptance along with that of cannabis. This health and wellness industry as we know is a trillion-dollar market for which psychedelics such as therapeutics based on psilocybin are gradually carving out their own niche. COVID showed us that there are abundant potentials in these markets and many are still leveraging on it till now. This is why a merger between Ei. Ventures and Mycoytopia, a research company focused on developing new therapeutics based on psychedelics is in the works. The company formed from the merger will also be called PSLY.COM and it will set the tone for many future endeavours by the companies.

The move by Ei. Ventures show that many firms and entrepreneurs believe in the potential and promise of psychedelics. It is only a matter of time before billions key into it and we have another replica of the cannabis industry on our hands. Truly, much of this is dependent on the presence of more clinical research and psychedelic therapists to promote the goodness of the natural drug. Till then, we can only hope for more positive moves like this both for psychedelics and its integration into the metaverse.

PSYCHEDELICS AND THE METAVERSE, READ ON… 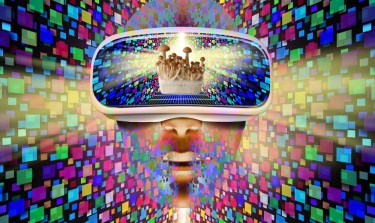 ARE PSYCHEDELICS OPENING METAVERSE DOORS IN THE HUMAN MIND?

Previous 31 Days Without Weed - A Stoner's Reflections on Sober October

How We Got Here Today

The Ghost Train Haze strain has not only won second place in the 2013 High Times Cannabis Cup but was also the overall winning sativa of the 2014 competition. If that’s not a sign to grow this cultivar, we don’t know what is! This award-winning strain delivers a potent, almost psychedelirush, all while enticing your …

Recycling cannabis plastic waste doesn’t necessarily happen. You might think you’re recycling that wasteful plastic container by throwing it in a blue bin. But most cannabis containers are low-grade plastic waste. Odds are, this plastic will end up in a landfill or head overseas where it’s incinerated. But one Edmonton man is putting an end …

Dabs and joints waste an equal amount of THC, depending on the cited study. Despite the results, both mediums can be and have been vastly improved upon. Thanks, stoner science! For instance, dab rigs come in many forms. Terp slurpers are a recent innovation that provides a delivery method for consuming extracts that will waste …