Pharmacies in Canada might sell boxes of CBD, but not gas stations


What are cannabinoids? We’ve all heard of cannabis and hemp, THC and CBD, but what about THCV and CBDV, CBN and CBG? How many cannabinoids are there? It turns out that there are more than 100 cannabinoids, each with unique effects and benefits. For example, THCV oils and gummies increase energy and suppress hunger, making them a potentially useful addition to a weight loss regime. On the other hand, CBDV is being studied for autism, CBG for pain and inflammation, and CBN is believed to be the best for relaxation and deep sleep.

For this article, we asked industry leader Rare Cannabinoid Company to answer the most frequently asked questions about these beneficial compounds, their uses, and how to take them. The premium Hawaiian company was the first to produce pure THCV and CBDV oils and has the widest selection of oils and gummies of CBC, CBDA, CBDV, CBGA, CBG, CBN, THCV, and terpenes.

What are cannabinoids? They are a class of compounds found in cannabis and hemp plants. CBD (cannabidiol) and THC (tetrahydrocannabinol) are the most well-known cannabinoids, but there are many more that offer unique benefits.

How many cannabinoids are there? More than 100! At least 113 distinct cannabinoids have been identified in cannabis and hemp.

How do cannabinoids work? They interact with the body’s endocannabinoid system, which regulates mood, sleep, appetite, inflammation, and other functions.

What do cannabinoids do? They vary depending on the cannabinoid. For example, THCV increases energy and decreases appetite, which has led to it being associated with weight loss. Meanwhile, CBN is believed to promote relaxation and deep sleep.

What are the different types of cannabinoids? Only a small fraction are currently able to be extracted and used in commercial products. These include: CBD, THC, CBC (cannabichromene), CBDA (cannabidiolic acid), CBDV (cannabidivarin), CBGA (cannabigerolic acid), CBG (cannabigerol), CBN (cannabinol), and THCV (tetrahydrocannabivarin). We expect this number to grow as advances in breeding and extraction continue to improve. On our website, Rare Cannabinoid Company, you will find links to news articles and dozens of scientific studies on each rare cannabinoid and its effects and benefits.

Will cannabinoids get you high? Some cannabinoids, like THC, will cause psychoactive effects (a.k.a. a “high”). However, many others like CBD do not have this effect. For example, THCV is believed to improve concentration and focus.

Are cannabinoids legal? In the United States, the 2018 Farm Bill legalized hemp-derived cannabinoids that contain less than 0.3% THC. This means that products like CBD oil, CBG oil, and CBN oil are widely available and completely legal in most states. However, synthetic cannabinoids like Delta-8-THC are banned in many states.

Are cannabinoids healthy? There is a growing body of evidence that suggests cannabinoids offer a wide range of health benefits. For example, CBD has been shown to improve stress resilience and reduce temporary inflammation and one CBD product has been approved as an anti-seizure medicine. Meanwhile, CBDV is being studied in children and adults with autism spectrum disorder and THCV has been found in animal studies to reduce hunger and offer benefits for obesity and type 2 diabetes. CBG oil is also being used in many animal studies on various diseases. However, synthetic cannabinoids, like Delta-8-THC, can be dangerous, especially if they are made in unregulated facilities and do not offer proper third-party lab test results.

What are the side effects of cannabinoids? This depends largely on which cannabinoid you take. For example, THC is psychoactive and increases hunger. Conversely, THCV can improve focus and energy while suppressing hunger. For someone who is overweight, THCV may be helpful, however, for someone who struggles with an eating disorder, appetite suppression would be a negative side effect of THCV.

What are the primary health and wellness benefits of each cannabinoid?

What plants produce cannabinoids? While the majority come from hemp and cannabis, cannabinoids may also be found in other plans such as rhododendron, licorice, liverwort, and echinacea.

What does total cannabinoids mean? If you see this written on product packaging, it refers to the total milligram weight of all of the cannabinoids in the product – CBD, CBG, CBN etc. added together. It’s important to know the amount of each cannabinoid you’re taking. For example if a product calls itself “THCV gummies” but the THCV content per gummy is 1mg and the total cannabinoid content is 24mg, it may essentially be a CBD gummy with a tiny bit of THCV in it. Please note that our THCV gummies contain 25mg THCV in each gummy! However, if you’re looking at a hemp-derived Delta-9-THC product, it will have to contain a large amount of CBD and other cannabinoids to be legal and remain under 0.3% THC by weight. It would also be dangerous for a product to contain too much THC because it is psychoactive. 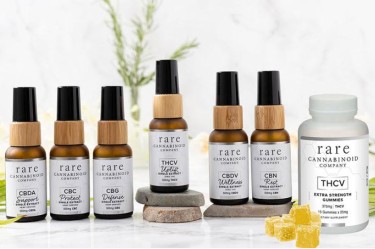 Is there anything else you’d like to add to our Q&A on what is cannabinoids? That covers all the basics on these amazing compounds. As you can see from the last question, each cannabinoid is unique and there is a lot to learn about them. For anyone seeking more in-depth information, please take a look at our own Q&A, numerous blog posts, and links to scientific studies on our website. We also have a directory of independent cannabinoid advisors who see patients in-office and by phone and video appointments. These doctors, nurses, and clinicians can answer questions about which cannabinoids are best for particular situations and ailments. For product advice on oils and gummies, we welcome questions emailed to us at info@rarecannabinoidco.com. Thank you for this opportunity to share our knowledge and interest in cannabinoids.

Previous The Secret to NFL Great Aaron Rodgers' Success? Tripping Balls on Psychedelics Made Him a Two-Time MVP

Cannabis for Cancer – What are the Lastest Medical Studies Telling the World?

How pine resin can be used with cannabis extract

A federal exemption has allowed British Columbia (B.C.) to decriminalize drugs. Adults in British Columbia will be able to possess small amounts of substances. Things like opioids, cocaine, methamphetamine, and MDMA. Because drug prohibition is Ottawa’s responsibility, there had to be an exemption for British Columbia. B.C. is the first and only province to receive …

Today Marks the Beginning of Sober October   A few years ago, Joe Rogan and his group of booze drinking, weed smoking, comedian friends started a challenge where they would stop drinking, stop smoking weed, and do exercise everyday for the entire month of October.   For many years, I really didn’t see the need …

Unless you’ve been living under a rock for the past two decades – cannabis is popular! Over the past 10 years, the support for full cannabis legalization has only been growing and some of the recent polls suggest that close to 70% of the country is in favor of making marijuana legal.    “Gallup has …