In an upcoming study, scientists from Johns Hopkins University will look into using psilocybin as a tool for quitting smoking. The theory that psilocybin can help with smoking cessation will be tested in a randomized controlled study by researchers affiliated with Baltimore’s Johns Hopkins University later this year. The study, which is a component of a more comprehensive examination into whether the hallucinogenic component in magic mushrooms may treat diseases including addiction, depression, and anxiety, is funded by the National Institutes of Health (NIH).

The new study aims to find out whether psilocybin can help tobacco addiction. Johns Hopkins University academics will be in charge of the trial, which will be carried out in collaboration with experts from NYU Langone Health and the University of Alabama at Birmingham.

Magic mushrooms are psilocybin-containing mushrooms. Serotonin receptors are typically activated by psilocybin in the prefrontal brain, and this area of the brain influences perception, cognition, and mood. Additionally, hallucinogens affect the parts of the brain that control arousal and panic reactions. It’s not a given that psilocybin usually produces vivid or audible hallucinations; instead, it alters how certain drug users see things and people already in their environment.

The amount of the drug taken can influence the effects of psilocybin, one’s prior experiences, and expectations of how the experience will unfold. Psilocybin typically starts to have hallucinatory effects 30 minutes after use and lasts 4-6 hours. The results of psilocybin are generally comparable to those of LSD. In some people, sensory perception and thinking process changes might linger for many days. They involve profound alterations in mood and feeling and changed time and space perception. Psilocybin may also cause euphoria, calmness, spiritual awakening, derealization—the perception that one’s surroundings are not real—distorted thinking, and visual change and distortion, such as the perception of bright hues and haloes of light.

According to the Centers for Disease Control and Prevention figures, it can be exceedingly challenging to stop smoking. Each year, fewer than 1 in 10 smokers attempt to quit successfully. Principal investigator of the randomized controlled experiment Matthew Johnson, a specialist in psychedelic drugs at Johns Hopkins Medicine, justified his decision: “Few treatment alternatives have been beneficial at helping people overcome tobacco addiction.”

Following the reports of the NBC, Johnson, numerous established treatments exist, but the medications and therapies all need to be improved. Over the long term, most people in the study were not assisted by any medicine, and the success rates are still relatively low, even six months later.

Psilocybin has shown some potential as a tool to aid smokers in quitting. In this latest research, Johnson and his team of cannabis and psilocybin researchers established that psilocybin could help at least 10 out of 15  smokers stop smoking for at least one year. The new inquiry, which will begin later this year, will be the first psychedelics-related study funded by the NIH in more than 50 years. The lack of federal financing has made it challenging for researchers to examine the drugs’ therapeutic potential. The chairperson of Dell’s Medical School of psychiatry and behavioral sciences, university of Texas, Dr. Charles Nemeroff, lauded the latest research saying that the NIH being interested in psilocybin research is excellent. It will provide us with the funding required to conduct these meticulously monitored investigations.

To complete the double-blind, randomized clinical trial, 66 participants will receive talk therapy and two doses of either niacin or psilocybin. Participants in both groups will receive psilocybin in two sessions separated by a week to compare its effectiveness to the niacin control. The research group is also engaged in a study assessing the effectiveness of psilocybin and nicotine patches as cessation aids. Preliminary results showed that half of the 61 participants who took psilocybin had abstained from smoking for at least a year. Contrarily, just 27% of persons who used nicotine patches had equivalent outcomes.

Baltimore resident Anne Levine, 58, took part in the study and ingested psilocybin. She asserted that she had smoked a pack of cigarettes a day for the preceding forty years and had made at least a dozen prior attempts to quit. She hasn’t craved or had any cravings to smoke while taking psilocybin. Levine believes that she no longer craves cigarettes is the most bizarre thing. When she gave up smoking in the past, she always did. That is not something I have anymore. I don’t have any bodily or emotional urge to smoke. Although psilocybin has successfully treated addiction, researchers are unaware of how drugs help people stop taking narcotics.

According to Johnson, the million-dollar question is very challenging to answer. He said he does not think there are any strong answers in the field for what changes the brain makes a year or six months after quitting narcotics. Other studies have shown that people who use psychedelics “have a shift in their personality, on average, towards being more open to new experiences, and that may be expressed with smoking in any number of ways,” he said.

Dr. Joshua Woolley, an associate professor of psychiatry at the University of California, San Francisco, who is unaffiliated with the new research, concurred with the theory that psychedelics can help people let go of behaviors that have become imprinted over time. He claimed that assisting individuals in escaping behavioral vices will positively impact mental health, addiction issues, and smoking.

Psychedelic research and therapies are finally receiving the much-needed support they need to carry out longer and more comprehensive research,  thanks to the government’s  significant contributions financially and politically.

While psilocybin may be an efficienct cure for several diseases and addictions, the truth remains that it could be a vital significant source of revenue for the country when it is finally decriminalized. More experiments like this would prove to the government that psychedelics and magic mushrooms can be the future, medically and economically. 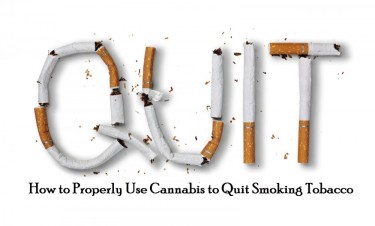 CAN CANNABIS HELP YOU QUIT SMOKING? WE ASKED THE EXPERTS!

Previous Can You Buy Weed with Food Stamps?

The End of CannaBro Culture?

Cannabis Seeds are Legal to Buy and Sell Says the DEA

With the beginning of February comes the stress of planning for Valentines day. So why not make your valentines special with a cannabis-infused Creme Brulee. For this recipe you’ll need some cannabis-infused heavy cream. Lucky for you, we’ve got that covered too, just click here. As a quick note, you can add different flavours to …

War and Peace and Cannabis

Since it is almost always the poor sent to fight wars, the political left has correctly used the metaphor of pawns in a larger, murderous chess game. This tide started to turn under Obama. His 2008 campaign is a testament to how the left used to be antiwar. But once he became president, not only …

Now that using cannabis is finally finding its way out of the dark corners, weed-related gear is becoming more sophisticated than ever. Gone are the days when cannabis enthusiasts were stuck with primitive tools, often homemade, when dispensaries still weren’t prevalent. Today, weed-related products are now easier to find and purchase.  If you’re reading this …

It’s been four years since the Canadian government passed the Cannabis Act, and here are four reasons why Canadian cannabis legalization sucks. Now, you may think I’m just nitpicking here. But people are still receiving criminal records for cannabis. There still exists a peaceful “black market” of cannabis farmers. Even the large, licensed producers don’t …

Ireland is the latest European country to take a step closer to cannabis legalization. Introduced by a People Before Profit Party member, the bill would legalize cannabis possession for adults over 18. However, the bill doesn’t include cannabis sales or cultivation. It is more decriminalization than the commercialization of the industry. The bill says possessing …